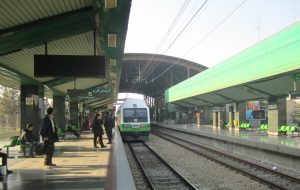 Tehran Urban and Suburban railway company awarded Mapna Group the contract for Tehran Line 5 modernisation which has a length of 67 km linking western district of Sadeghieh to Karaj suburb, 50 km west of Tehran. The line is served by eleven stations.

Modernisation works were launched by installing the infrastructure overhead equipment at Mehrshahr terminal, in Karaj. Drilling operations, stabilization of embankments, subsurface water drainage, reinforcement, and concreting of the railway structure are also carried out as part of the Tehran Line 5 modernisation project. This line is Iran’s oldest metro line which entered commercial operation in 1998.

The first phase of the project includes the procurement and installation of contact wires and fittings, the modernisation of the components, the preparation of technical data sheets, and increasing the capacity of Mehrshahr terminal.

In addition, there are plans to extend the Line 5 by to the Hashtgerd terminal which was opened in December 2019 and needed a USD 75.7 million investment. The extension will be made by linking the terminal with Golshahr metro station in Karaj, situated on Line 5.

Tehran Line 5, a commuter railway line, is an extension of the Line 2, with a common station at Sadeghiyeh and has a connection with Line 4, through Eram-e Sabz station.

Tehran metro system comprises 7 lines of which six are metro lines and one is a commuter rail link. The authorities have plans to expand the network by extending line 4 and 7. In 2019, a 9-km metro section and three stations forming Line 6 was opened, running in south capital from Shohada Square, on Line 4, to Dolat Abad. When completed, the Line 6 will have 38 km providing metro connection between Sulqan rural district in northwestern to Shahr-e-Rey region, which now is part of Tehran metropolitan area.