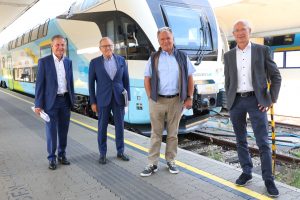 The Head of Mobility Directorate General at Austria’s Federal Ministry of Climate Action, Environment and Mobility, Herbert Kasser, and the CEO of of Westbahn, Erich Forster, presented the new Kiss 3 trainset, manufactured by Stadler.

The third generation of fleet that WESTbahn has ordered from the Swiss manufacturer is also the first to be on the operation in Austria with approval from the European Railway Agency, in less than two years after the order contract was signed.

As the most modern train series in Austrian long-distance traffic, the Kiss 3 double deck trains are also an asset for the Klimaticket (the annual ticket for the Vienna – Salzburg rail services), because they are new, safe and comfortable vehicles, providing passengers modern amenities.

To offer the Klimaticket customers not only benefit state-of-the-art trains, but also more connections from October 26th as Westbahn is expanding its timetable by eight train connections per day.

The new Kiss 3 vehicles will offer up to six continuous connections per day between Vienna Westbahnhof and Munich Hauptbahnhof and from here, the passenger can easily change to the S-Bahn to Munich Airport. Within the next timetable, starting December 2021, the operator, in cooperation with the State of Salzburg and Salzburger Verkehrsverbund will provide to Salzburg two trains in the morning and three afternoon trains from Salzburg in Straßwalchen, Neumarkt am Wallersee and Seekirchen am Wallersee.

Despite the expanded technical equipment, the weight of the Kiss 3 trainset was reduced by two tonnes which means that the train uses around 25% less energy for a journey from Vienna to Salzburg than other fleets on this route. In addition, the Kiss 3 are “route-friendly” on the infrastructure, as the maximum axle load is only around 18.5 tonnes, around 3.5 tonnes below other common long-distance trains. The new vehicles are better equipped for operational operations than the fleets before benefiting the ETCS Level 2 – Baseline 3 train control system which ensures increased safety and comfort.

The train has an improved air conditioning system, optimised toilet system with disinfectant dispenser. A novelty is the introduction of a new class (Comfort Class 2+), expanding from a two (Standard and First Class) to a three-class concept. The three distinct colours (orange, yellow and petrol) associated to each class help travelers to better orient in the train but they are also a guidance role inside the train and also when the reservations are made online.

In 2019, Westbahn and Stadler signed a EUR 300 million contract for the supply of 15 six-car double-decker Kiss trains, including the delivery of maintenance and general inspections and revisions. Nokia was selected to design, install and maintain the Wi-Fi connection and the switching and control systems for company’s operations control centre.