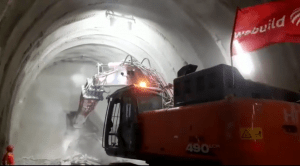 The new San Tomaso tunnel which is single-track, approximately 1500-metre-long, runs from the entrance to the Genova Brignole station up to the existing section of the San Tomaso Tunnel, where the underground level of Genoa Piazza Principe is located.

The Genoa junction project will strengthen regional and metropolitan connections, by quadrupling the Genoa Voltri – Sampierdarena line, and by building two new tracks (sixfold) between the railway hubs of Piazza Principe and Brignole.

The works are carried out by Webuild under the superivision of the Government’s Extraordinary Commissioner, Calogero Mauceri.

The Genoa junction project involves building two further tunnels. The New Colombo Tunnel wil be 1,409 meters long and the Polcevera Tunnel, 2,167 metres long. Their construction will allow an increase in the capacity of the lines near the junction, also potentially increasing the train frequency, by separating regional and metropolitan trains from long-distance and freight ones, and by connecting the last mile of the Terzo Valico dei Giovi to the Port of Prà -Voltri.

One completed, the Terzo Valico dei Giovi – Genoa Junction will reach a total of 53 km, 37 of which in a tunnel. The project is 51% completed and will strengthen the connections between Northern Italy and the rest of Europe. It will increase Italy’s competitiveness, giving it a more central role in trans-European connections. It will also make Genoa’s network and its port increasingly more functional as an international hub, due to the interconnections to Turin, Milan and subsequently Europe.

In terms of sustainability, it will result in a 33% reduction in travel times, between Genoa and Milan, thereby reducing CO2 emissions by 55% compared to road transport.