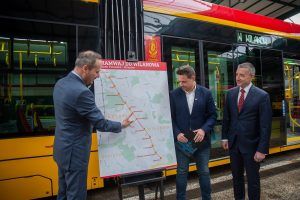 The public transport of Warsaw ZTM and Budimex signed a contract for the construction of Wilanów tram extension. The project covers an 8 km tram line and 4 junctions towards Śródmieście, the central district of the Polish capital, where the suburban and regional train station is located. The project also includes the construction of drainage, the power and telecommunications network, and the traction network covering of three new traction substations, including the first underground substation in Warsaw.

The construction will start within 5 months and is expected to be completed in January 2024.

The new route will start at the junction of Puławska and Goworka streets and includes the reconstruction of an existing section of the tram route from Rakowiecka Street to Plac Unii Lubelskiej. The tram route will cross Goworka and Spacerowa streets with a difference in elevation of as much as 22 metres in the direction of Lower Mokotów. Then the line will continue straight along Belwederska and Sobieskiego streets in the direction of Miasteczko Wilanów. A terminus for two-way trams will be located at the junction of Rzeczypospolitej and Branickiego avenues.

Two branches have been planned for the route. The first will run along Gagarina Street up to Czerniakowska Street, a separate investment carried out by Tramwaje Warszawskie and the Municipal Water and Sewerage Company. On this section, trams will finish their route at the terminal for two-way trams.

Budimex shall have 22 months to build the route in its basic scope, covering the tram route from Puławska street to the junction with Św. Bonifacego street. An option, which Tramwaje Warszawskie may decide on within 10 months of signing the contract, is to lead the entire route to Wilanów, to the junction with Branickiego street. The contractor shall have a total of 21 months to build the routes in this variant.

The stops on the new route will be designed to provide accessibility for disabled persons and will be equipped with electronic information boards with timetables. In total, 31 stops will be created. A green wave system will operate along the entire route, thanks to which trams will not have to wait for a green light at intersections.

The new tram route will significantly reduce the travel time for the residents of Wilanów who commute to the centre of Warsaw. The journey to the Centrum metro a station on Line M1 will take about 30 minutes compared to up to 45 minutes by car on the same route.