2022 is the year of extensions of the tram network in Warsaw which has either started the works for a series of lines or has signed contracts for the start of the projects. The authorities announce that in general, the new extensions will be completed in 2023, giving citizens access to public rail transport, the most ecological solution for the decarbonisation of a transport system. 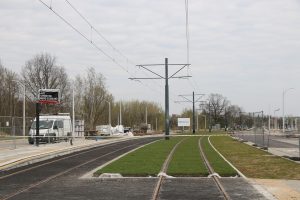 Warsaw’s public transport system is expanding in order to match the future population growth and the new trend of reducing environmental impact. Approximately 1.7 million inhabitants live in Warsaw, and the war in Ukraine seems to change the structure and the number of the population of the Polish capital. According to the statements of the mayor Rafał Trzaskowski, 2.5 million Ukrainians arrived in Poland, of which more than half crossed Warsaw, Poland becoming the second country with the largest refugee population in the world. Of those who left Ukraine, 300,000 chose to settle in the city or the suburbs of the capital city; the mayor stated that the population of Warsaw increased by 17% in just one month and if the war intensified, the numbers would swell rapidly and eventually double, the city mayor said this spring.

Of course, such a sudden rise in the population means addressing the problems, especially those relating to the securing of shelters, medical services, schools and transport. The city’s population is estimated to increase by up to 2.25 million in the coming decades, and the refugee problem could also come with a sudden increase compared to the one estimated by the authorities before the war. So, the capital of Poland could face bigger challenges regarding the population growth which means creating new jobs, developing the education and health systems, developing the public transport to create a system that is adaptable to demand and that, at the same time, tackles the issue of climate change.

In 2020, public transport ensured the mobility of 726 million passengers, down from 2019 when a record 1.2 billion trips were recorded, but the drop was the result of the pandemic and the sanitary measures imposed to contain the spread of the virus. The tram network ensured the mobility of 169 million passengers (down from 296.4 million in 2019). The metro system recorded 162.3 million trips (compared to 241 million in 2019). As to the suburban and regional rail transport, 42.6 million passengers were transported, of which 14.9 million were transported by the regional operator Koleje Mazowieckie, 25 million by the local operator SKM in Warsaw agglomeration, while 2.7 million passengers chose Warsaw Commuter services Railway (MKD).

Warsaw is already implementing its 2030 strategy, which takes into account the creation of an efficient public transport system as part of the “functional space” policy, which provides for a structure based on the concept of city centre and a network of centres at district and sub-district level, with an adequate and harmonious development of public transport, public spaces and natural environment that will be indispensable in providing opportunities for fast, comfortable and safe mobility in the city and its metropolitan area. Regarding public transport, the strategy takes into account the expansion of the system that will become environmentally friendly and that will be able to address future demands. The development of the system places emphasis on the expansion of tram and metro networks, the development of stations as a transfer bridge to drive the integration of services, providing citizens with fast connections to all areas of interest. The policy of the authorities is to make citizens aware of the impact of transport on the environment and to determine them to choose the most ecological way, through public transport which will have an impact on the decongestion of road traffic and the reduction of the costs involved, thus succeeding in changing people’s habits regarding mobility.

Overall, through all the measures, projects and solutions offered, the authorities hope to increase the market share of public transport by 15%, from 57%, in order for it to reach 72% in 2030.

The public transport authority ZTM provides transport services to the citizens of the city and to those who live in the 33 municipalities in the metropolitan area with a tariff programme that offers access to both services within the city and railway services in the capital area. The 26 tram lines with a total length of over 376 km are operated by over 400 vehicles.

An important step in the expansion of the tram network was initiated in March 2022 by signing the contract with Budimex for the construction of the line from Wilanów to the Śródmieście district, served by the railway station with the same name. 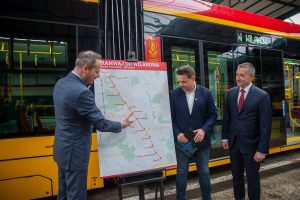 “The new route will allow the residents of this district to quickly and comfortably reach the city centre on green tracks. A friendly Warsaw means easily accessible public transport, so we will successively extend the tram network in the capital. We are already working on the documentation for the tramway along Pola Mokotowskie and Modlińska street and on the construction plans for the route to Gocław and Zielona Białołęka’, Rafał Trzaskowski, Mayor of Warsaw, said at the signing ceremony.

The works started in August, and from January 2024 when the works are scheduled to be completed and after the tests have been carried out, passengers will be able to travel from Wilanów (south-east of the capital city) to the city centre in just 25 minutes compared to more than 45 minutes at present.

An extension of 1 km and 3 stops is also planned on Gagarina street between Czerniakowska and Belwederska, as a branch of the Wilanów line. The project is being implemented separately from the Wilanów extension through a PLN 4.3 million (EUR 928 thousand) contract.

Planting along the line has been taken into account with plans that include a special plant that is resistant to high temperatures and does not require watering, and for the first time, lime and sycamore trees will be planted next to the tracks, while in narrower places specially shaped trees will be planted so as not to interfere with traffic. The new line will see 624 trees planted, which will be in keeping with Warsaw’s policy regarding vegetation standards.

The project will be co-financed by the European Union as part of OPI&E 2014-2020, which also includes the purchase of 50 new low-floor light rail vehicles, the construction of a depot in Annopol and the installation of passenger information boards at the stops. The project in its entirety amounts to a total of 1.19 billion (EUR 254.5 million), of which the European co-financing is PLN 555 million (EUR 118.7 million).

Another project to expand the tram network is the one in Wola (district on the eastern side) to the city centre, on a 2.3 km line between Wolska and Skierniewicka and it also covers the modernisation of 1.2 km of the existing line between Wolska and M. Kasprzaka. The project includes the construction of 3 stops, one of which is at Warszawa Wola station. The first tracks have already been installed on one section, and the plans also provide for the planting of over 94 trees.

The project will be completed in 2023 and will provide a journey than will only take 10 minutes to get from the centre to the Wola district, while also securing connections to two metro stations.

Also this year, ZTM signed a EUR 311,000 contract with Databout for the preparation of a technical and economic study for the construction of the tram line extension on Modlińska street, as an extension of the existing line on the route of Jagiellońska street, to the FSO car factory which ends in a loop at Home Army. From here, it will be built towards Żerański Canal and along Modlińska to connect with the line from Młociny to the Vineyard.

In March, construction began also for the 2.3 km Kasprzak tram extension between Wolska and Skierniewicka with three stops including one in Warszawa Wola railway station and for the modernisation of the existing 1.2 km line between Wolska and M. Kasprzaka. The new extension will facilitate access to the metro network through two stations on Line M2. It is scheduled to be completed in 2023 under the PLN 205 million (EUR 43.85 million) contract.

As part of a PLN 75 million (EUR 16 million) construction contract with the consortium made up of Balzola Polska and Construcciones y Promociones Balzola, Warsaw put into operation a 1.3 km extension of lines 2 and 17 from Nowodwory to Winnica, in the northern part of the city. The extension also provides access to the metro system via the Młociny metro station (terminus of Line 1). 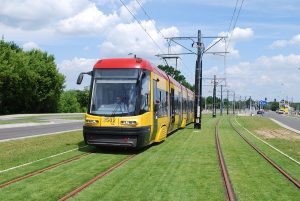 These projects are part of the authorities’ plan to develop the tram network, and other projects are underway and include the extension of the network to Gocław and the environmental decisions for the construction of routes to Zielona Białołęka are pending.

In 2020, the PLN 5.8 million (EUR 1.2 million) design contract for the line from the centre to Gocław was signed with Progreg. The line will have a length of 3.6 km and 7 stops and the project will also concern the modernisation of a 2.5 km line and the reconstruction of 9 platforms. The new section will offer a journey of only 20 minutes. The line could be completed in 2023.

Both from an environmental and aesthetic point of view, the newly built tracks will be grass covered and trees will be planted along their route; trees have already been planted on 27 km of existing lines and the rest of the tram network is also going to benefit from green track technology.

“Green Warsaw is one of my priorities, which is why we introduce green wherever possible. It is not only new trees and shrubs in Warsaw’s forests, parks and along streets. We are also greening the tram tracks, stop shelters, and even traction poles,” the Mayor of Warsaw said.