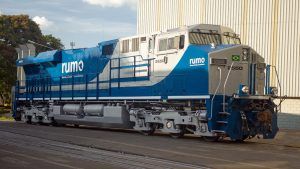 The locomotives feature Evolution Series diesel engine which produces the same power – 4,500 HP with 12 cylinders compared to its predecessor the 16-cylinder FDL Advantage engine. “This represents greater energy efficiency and lower emissions, thanks to a project aimed at the thermal efficiency of combustion combined with a dual-intake air cooling system adopted in these four-stroke turbocharged engines equipped with electronic fuel injection,” Daniela Ornelas, Vice President of Products at Wabtec said.

This engine technology enables the locomotive to reduce fuel consumption and emissions by more than 5% compared to its predecessor. The high-strength materials used in the ES44ACi diesel-electric locomotive also improve the reliability of the diesel engine and dramatically increase intervals for major maintenance by approximately 28%, lowering operating costs over the locomotive’s life cycle.

To deliver the ES44ACi locomotive to Brazil, Wabtec worked with Brazil’s rail operators to an 8-year project with the objective is to improve country’s heavy-haul rail network and drive sustainability.

To date, the company already secured orders for 25 locomotives from Suzano, Rumo and MRS. Rumo, which is the largest railway operator in Brazil, is to receive soon the ES44ACi. The new acquisitions for the fleet reinforce the technological initiatives focused on operational efficiency and safety.

For MRS, a logistics operator that manages a 1,643-km rail network in the states of Minas Gerais, Rio de Janeiro and São Paulo, the ES44ACi locomotive will help optimise its system. The new locomotive adds more technology and advances to the national railway sector, which the renewal of its concession is heading towards the final stretch at the Federal Audit Court.