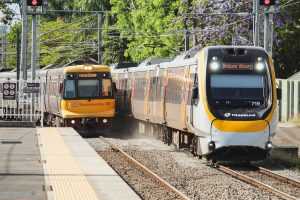 Queensland Rail awarded Vossloh Australian subsidiary Austrak a contract for the supply of concrete sleepers which will be manufactured at its plant in Rockhampton, Queensland.

The three – year contract which has a value of EUR 15 million will support Queensland Rail’s rail infrastructure modernisation projects which will improve the performance and increase the reliability of the rail network.

The successive replacement of wooden sleepers with new, more durable concrete sleepers will play an important role in this programme.

“We are very pleased that we will continue our long-standing business relationship with Queensland Rail under the framework agreement we have now won. This is an impressive vote of confidence on the part of our customer and consolidates our leading market position in Australia” Jan Furnivall, Chief Operating Officer of Vossloh AG said.

Founded in 1980 and headquartered in Brisbane (Queensland), Austrak Pty Ltd. employs around 140 people and has been part of the Vossloh Group since December 2018.

Queensland Rail is currently implementing 12 modernisation programmes of which the two are  largest projects. One of them covers the improvement of the capacity along the North Coast Line. The rail company is undertaking works to extend 8 rail passing loops between Rockhampton and Townsville. The extension works will allow the passing of freight services on what is otherwise a single track. The loops being extended along the line are located at eight points. Mount Ossa and Kunwarara  are the remaining passing loops currently under construction and scheduled to be commissioned by 2022.

Upon completion of the project in late-2022, freight trains up to 950 metres long will be able to use the network, which is a 45 per cent increase from the current maximum length of 650 metres. This project will provide a vital increase in capacity for freight transport in Queensland, which will benefit the local economy. It will also support over 300 local construction jobs for communities along the rail corridor, and enable freight operators to run longer trains and carry more goods along the North Coast line.

Cross River rail project is another important and large project which consists of the construction of a 10.2 km line from Dutton Park to Bowen Hills, including a 5.9 km of twin tunnels and four underground stations under the Brisbane River and Brisbane CBD.