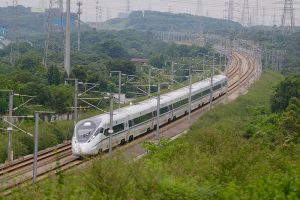 Vossloh Fastening Systems business unit has won a new rail fastening systems contract for the construction of a new high-speed line in China.

Under the contract with a value of EUR 30 million, Vossloh will start the deliveries in 2022.

The rail fastening systems are intended for a section of the planned high-speed line between the cities of Guiyang and Nanning in southern China. The high-speed line is planned to be taken into operation in 2023.

“We are very pleased that this order win will continue our success story in China, which has been ongoing for over a decade. This important order win fits seamlessly into our order trend, which has been very encouraging so far this year despite the COVID 19 pandemic, and clearly underlines the above-average crisis resistance of our company and our entire industry,” Oliver Schuster, Vossloh AG’s CEO said.

In 2019, the company has won a EUR 40 million rail fastening contract for the Hangzhou – Taizhou high speed line in south of Shanghai.

In the first half of 2020, Vossloh’s increasing earnings before interest and taxes (EBIT) came to EUR 30.1 million benefiting from a gain recognised in profit and loss resulting from a business combination achieved in stages of a joint venture in China in the Fastening Systems business unit totaling EUR 15.6 million; excluding this effect, EBIT came to EUR 14.5 million.