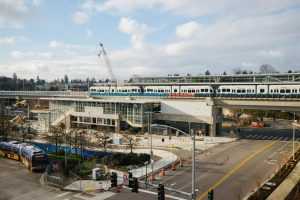 “Refinancing our earlier TIFIA loans will create more than USD 630 million in savings for our region’s taxpayers, helping us deliver the largest transit infrastructure program in the country as quickly as we can. Expanding the programme to include the Downtown Redmond Link Extension expands our savings still further,” Peter Rogoff, the CEO Sound Transit said.

TIFIA provides financing for the under-construction Downtown Redmond Link LRT extension consisting of a 5.5 km (3.4 miles) and two stations from the Redmond Technology station, which will be opened in 2023 as part of East Link, to downtown Redmond. The two light rail stations in southeast Redmond will serve Marymoor Village near Marymoor Park, and in the downtown residential and retail core. This extension will help reduce traffic in the region providing increased mobility and easy connections to bus and other local transit services. The project is scheduled to be completed by 2024 and the total project costs are estimated to be more than USD 1.6 billion.

The East Link Light Rail will connect downtown Seattle with the cities of Mercer Island and Bellevue. 22.5 km (14 miles) of double-track line and 10 stations will be constructed from downtown Seattle to the Overlake area in Redmond, Mercer Island, South Bellevue, downtown Bellevue, BelRed (Bellevue) and Overlake. Works started in 2016 and are scheduled to be completed in 2022 with operation expected to start in 2023. When in service in 2023, East Link will be known as the 2 Line.

The 12.5 km (7.8 miles) Federal Way Link extension starts from Angle Lake Station in the city of SeaTac to the Federal Way Transit Center. The USD 1 billion project also includes the construction of three new stations which will be completed in 2024.

The TIFIA loans will replace the current loan for the Sound Transit Northgate Link light rail extension, which is scheduled to open this fall. This 7 km (4.3-mile) light rail extension, including three new stations, which two underground (U District and Roosevelt stations), provide transport connection from the University of Washington north to Northgate.

The TIFIA support also include refinancing for the East Link, Lynnwood Link and Federal Way Link extensions of light rail as well as the operations and Management Facility East projects.