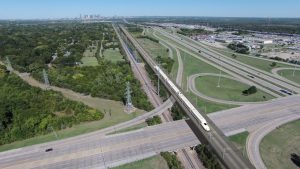 Texas Central signed a USD 16 billion contract with Webuild and its U.S. subsidiary Lane Construction for the construction the Dallas-Huston high-speed rail.

The agreement is the final step ahead of the financial closure foreseen in the coming months and the start of construction of the project, which will provide fast, safe and environmentally friendly travel, create thousands of jobs and give a major boost to the economy.

Webuild and Lane will oversee the civil engineering works, which entails the design and construction of the 379 km (236 miles) of railway, the viaducts, as well as the buildings and services for maintenance and other equipment, industrial buildings, train depots and facilities. A major part of the railway will be elevated.

This year, Texas Central signed a USD 1.6 billion contract with Kiewit and its Mass Electric subsidiary to install the core electrical systems for this line.

The Dallas-Huston high-speed rail will transform mobility between the two cities, bringing the Central Japan Railway’s Tokaido Shinkansen techology, the world’s safest mass transport system. The trains will run at speeds of up to 320 km/h (200 miles per hour), faster than any other rail service in the United States. It will bring them to either destination in less than 90 minutes, with a single stop at Brazos Valley near Texas A&M University. The departures will be every 30 minutes during peak hour.

The service will prove to be a major benefit for at least 100,000 people who travel between the two cities by car or air every week. It will help reduce greenhouse gas emissions by an estimated 101,000 tonnes per year. By 2050, approximately 13 million people are forecast to use the train service.