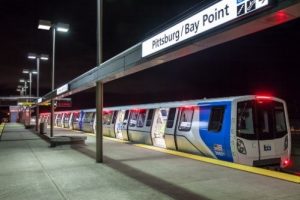 The project will improve capacity on the existing BART heavy rail system between the City of Oakland and downtown San Francisco.

The Transbay corridor capacity project involves a package of strategic investments that will increase train frequencies between San Francisco and Oakland by more than 30 percent, and overall capacity by more than 36 percent.

BART will require additional cars to make up the added trains and to make longer trains. The authority currently has 775 new rail vehicles on order, which will allow the agency to completely replace its aging fleet of 669 vehicles and to expand the fleet by 106 cars.  When this order is completed, BART will be able to provide some additional capacity in the short-term, but will need 306 more vehicles to get to the number of cars required to operate trains more frequently, which is a total requirement of 1,081 cars.  Of the 306 additional cars required, 252 are needed for BART to operate 28 ten-car trains per hour on the four lines (Red, Blue, Green and Yellow) that operate through the Transbay Tube to meet the CIG programme goals, and ultimately to run up to 30 trains per hour. The remaining 54 railcars are to increase capacity on the Orange Line which does not operate through the Transbay Tube, and to increase ready reserve trains, which are needed in case delays occur.

The project’s cost is USD 2.7 billion with this funding committed through the FTA’s Capital Investment Grants (CIG) programme. USD 1.53 billion will be covered by local, state and regional matching funds.  The Systemwide Core Capacity project is a USD 3.5 billion programme which will expand capacity throughout the entire BART system.