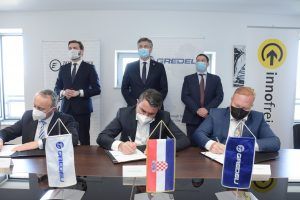 The Slovakian logistics company Budamar Group, Tatravagónka and the Austrian company Innofreight signed a framework agreement under which TŽV Gredelj will manufacture and supply InnoWaggons for the next ten years. EUR 2 billion is the estimated value of the agreement. Under the agreement, TŽV Gredelj will produce 1,000 freight wagons per year which will be acquired by Innofreight which will operate on the Europe’s rail network in the next few years.

This means TŽV Gredelj will complete the production of three to four wagons a day. Modern, highly automated and continued top quality will prevent downtime and enable independence from external suppliers.

“The step towards our own wagon production makes it possible to continue along this path in the future and to supply companies with high-quality and affordable InnoWaggons,” Innofreight says.

Around 400 people are currently employed at TZV Gredelj and with the new agreement, 600 additional jobs will be created which guarantees the highest level of production all year round. This is a sustainable development that guarantees Innofreight production reliability.

The contract will also have a positive impact on the Croatian economy the President of the Management Board of Gredelj, Ivan Petriček, said. The long-term contract will determine increased production capacities which will also mean an added value to the national economy on the entire industry chain.

“After nine years of bankruptcy, TŽV Gredelj along with its new owners – the Slovak Tatravagonka, is on the path to sustainable business,” the Prime Minister said.

TŽV Gredelj has been in insolvency since 2012 with HRK 900 million (EUR 119.98 million, in current prices) claims from more than 2,000 creditors. But in 2020, Tatravagónka has proposed a EUR 45 million investment in TŽV Gredelj and in 2021 the Slovakian rolling stock manufacturer rented out the production hall of TŽV Gredelj and started the freight car production for Western market. Tatravagónka which is member of Budamar Group since 2018, has acquired 100% of TŽV Gredelj and wants to use the potential of the railway freight bogies and wagon production plant, to develop repairs and maintenance of passenger cars, locomotives and electric and diesel motor units.