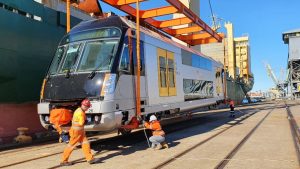 The first two of 17 Waratah Series 2 trains for Sydney arrived at Port of Newcastle at the beginning of July, the Transport for NSW announced.

The two double-deck trains will undergo further testing and completion works in Cardiff before being hauled by locomotive to the Auburn Maintenance Centre where they will undertake testing on the Sydney Trains network. “Most of the testing will take place at night and across the weekend to minimise the impact on customers,” the Minister for Transport Andrew Constance said.

The double-deck electric multiple-units are manufactured by a joint venture comprising CRRC Changchun Railway Vehicles and Downer Rail. They are assembled in Changchun.

The new trains are part of the AUD 4.3 billion (USD 3 billion) More Trains, More Services investment programme. In 2018, Downer successfully completed the first stage of the project, delivering 24 eight-car trains for Sydney’s rail passenger network. This fleet is now in passenger service and is maintained at the purpose-built Auburn Maintenance Centre. The second stage involves these 17 trains being added to the network by early 2021.

The trains are needed to support increasing patronage across the network and to provide customers with comfortable and reliable commuter services. In the last years, the ridership has increased by 30% reaching over 413 million passenger journeys each year.

“Over the last few years, we’ve seen a rapid growth in the number customers travelling on the rail network which is why it is important we invest in new infrastructure, including new trains,” Andrew Constance said.