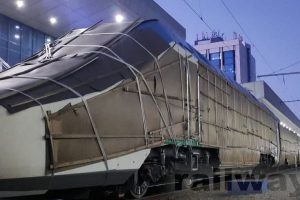 On July 30, a ceremony took place in Tashkent marking the arrival of two new Afrosiyob high-speed trains delivered by Talgo from Bilbao. For 30 days, the train will enter testing process before entering commercial services.

In early July, the train were shipped from Bilbao to St. Petersburg, travelling 4,000 km and from here, it traveled 4,200 km through the rail network of Russia and Kazakhstan to Uzbekistan, arriving in Tashkent on 24 July.

The new trains consist of two main locomotives and 11 coaches, including, two VIP railcars, two business-class cars, six economy-class coaches and one bistro car. The train has a capacity of 286 seats.

The first two Afrosiyob trains were acquired in 2011 and in 2017, two new other trains were purchased by the Uzbek rail operator. “The purchase of these electric trains has improved the quality of passenger transport on the railways of Uzbekistan, bringing the transport and communication systems of our country to the level of world standards,” X. Xasilov, the acting Chairman of the Board of Uzbekiston Temir Yullari said.
In 2019, Uzbekistan Railways and Talgo signed a new contract for the supply of two Talgo-250 high-speed trains under a EUR 57.5 million contract which is funded by the Spanish Fund for the internalisation of the company (FIEM). According to the investment project, in addition to two trains, the Spanish rolling stock manufacturer will supply four economy-class coaches, as well as equipment for repairs.

Four of Afrosiyob high-speed trains are running on the railway network of Samarkand, Jizzakh, Navoi, Bukhara and Qarshi. The train runs at a speed of 230 km/h covering the distance between Tashkent and Samarkand within 2 hours and from the capital to Bukhara within almost 4 hours. From Tashkent to Karshi, the train arrives in 3 hours and 20 minutes. In the near future, after the completion of the electrification of the new Bukhara-Khiva railway line, the high-speed trains will reach Khorezm, situated in the northwest of the country.