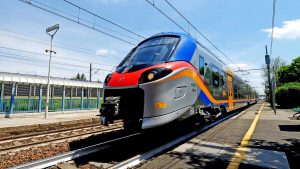 Trenitalia has received two more Pop trains for the Sicilian region, bringing to a total current fleet to 12 units, following the delivery of 3 new trainsets in October, added to the 5 units.

The new trains are manufactured by Alstom which will deliver for Sicily a total fleet of 43 Coradia Stream trains.

The new trains are operating on the Palermo-Messina and Messina-Siracusa railway lines.

Technologically advanced, spacious and eco-friendly, the Pop trains have a capacity for up to 500 passengers. With over 300 seats, it is equipped with larger windows for admiring the beauty of the landscape.

The electric, single deck, with three or four cars, and equipped with 4 traction engines, the new Pop train is part of the Coradia Stream family. It will travel at a maximum speed of 160 km/h, with 20% stronger acceleration than the previous generation

Up to 97% recyclable with a 30% reduction in energy usage compared to previous trains, the Pop trains (Coradia Stream trains) boast high standards of reliability and safety, with on-board cameras and monitors for live recording. The train offers an audio-video information and entertainment service with numerous LCD displays and a Wi-Fi network.

There are also two spots dedicated to the passengers with reduced mobility. Additionally, eight bicycles can be transported in the dedicated racks. At the request of the region, the train fleet destined for Sicily are also fitted out with handy tables to render the trip even more comfortable.

In May 2018 the Sicilian Region and Trenitalia signed a service contract foreseeing investments totalling over EUR 426 million, of which some EUR 325 million is destined to the purchase of new trains to enhance regional and metropolitan mobility on the island.

The operation confirms the importance given to regional transport in the FS Italiane Group’s 2019-2023 Business Plan. The long-term service contracts that Trenitalia has signed with the individual regions allow the FS Group to make important investments that generate positive repercussions both in the quality of the service offered to passengers and on the entire Italian industrial sector. Trenitalia continues with its contribution during this difficult time for the country, in the belief that the situation will improve shortly.