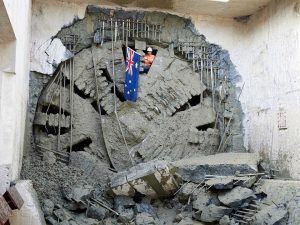 TBM Sandy has completed the tunneling of Forrestfield-Airport rail link, as it has arrived at Bayswater Junction on April 20, after a journey which spanned over 900 days.

The TBM Sandy completed tunneling works for the total 16 km, including under Perth Airport and the Swan River. This followed TBM Grace’s breakthrough at Bayswater dive in February.

Together the TBMs have installed a total of 9,000 tunnel rings, comprising 54,000 locally fabricated concrete segments to form the tunnel walls, which will link three new stations at Forrestfield, Airport Central and Redcliffe to the existing rail network.

With tunnelling of Forrestfield – Airport rail now completed, TBM Sandy will be dismantled and craned out of the dive structure.

The installation of the first stage of track slab is 50 per cent complete and track laying is scheduled to begin in July.

The construction and fit-out of the station buildings continues with the first trains expected to run on the new rail line in late 2021, providing a 20-minute rail link between the eastern foothills, Perth Airport and the city.

The Forrestfield–Airport rail link is an 8.5 km connection served by three new stations at Redcliffe, Airport Central and Forrestfield, creating a 20-minute train trip between CBD and wider Perth.

The project is part of the first phase of Metronet vision to create liveable communities connected by world class public transport.