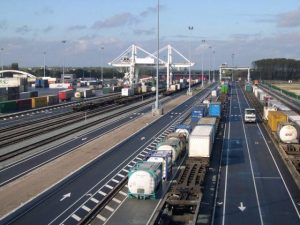 Transfesa Logistics has added a new international rail connection in Dourges, south of Lille in France, with a weekly stop, in both directions, to unload containers that come from Spain.

The frequency has increased and currently stops in Dourges between two and three times a week. These are mixed, multi-product trains, whose first destination is France, as well as the other merchandise that continues later on other routes to various European countries.

One of the main advantages of the stop in France is that part of the train is empty at this point, so it can be used to reload goods to various destinations around Europe. There is the possibility of forming larger compositions with units from other companies that join those of Transfesa Logistics.

In this first stage, 90% of the operations originate and depart from Barcelona and Valencia. The routes are used to transport fruit and vegetables, oil, as well as automotive components and tanks. The company’s goal is to use this connection for the export of a large part of the winter fruit and vegetable produce and reach a volume of 40 weekly loads of refrigerated goods to deliver to Belgium and the Netherlands. A figure equivalent to 40 trucks per week and which significantly reduces CO2 emissions.

10 tanks are being transported weekly, diversifying the type of products that are transported. It is estimated that in the next stages operations will be expanded to reach three or four regular stops a week in both directions.

Another advantage of the stop in Dourges is that merchandise can be transported between the north of France and England, which has sparked the interest of many companies from different sectors. The collaboration agreements have already been concluded. This connection simplifies the transit of goods to the United Kingdom, avoids the bottlenecks that trucks suffer daily, since the first authorised entry point for the train is Barking, to the east of London.

“The incorporation of this new area of rail operations opens up a wide range of possibilities to expand our services. Dourges is a natural step towards the United Kingdom, so we now have a greater capacity to increase the traffic that currently exists with this country,” Pablo García, traffic implementation project manager at Transfesa Logistics said.