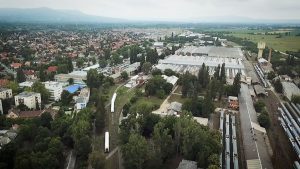 MÁV Start awarded TMH Hungary a four-year contract to repair and modernise passenger coaches. Under the EUR 90 million contract, TMH will modernise at its Dunakeszi factory 403 coaches of various types, including sleeping cars.

The project involves the modernisation of 209 passenger coaches and repair works for 194 cars for intercity and international transport services.

As part of the modernisation, the coaches will be equipped with automatic door systems, LED lighting and USB connectors. In addition, according to MÁV Start requirements, the interior and exterior of the cars will be updated.

“Winning this contract for MÁV-Start is an important step for us, since our clear intention for Dunakeszi is to set up the biggest rail vehicle manufacturing and servicing base for Hungary and Eastern Europe,” Terence Watson, senior vice president Europe of TMH International, said.

The contract was signed one month after TMH Hungary has completed the acquisition of Dunakeszi plant, where new Stadler EMUs and CAF trams are assembled.

The most important contract for Dunakeszi facility envisages the construction of 680 passenger coaches for Egypt. TMH International together with Magyar Vagon will manufacture the coaches under a EUR 1 billion contract won by Transmashholding. In June, the first coaches have been delivered and entered transport services on Cairo – Sohag railway route in July.

In addition, at Dunakeszi facility, Stadler EMUs and CAF trams are assembled.

Through the acquisition of Dunakeszi rolling stock manufacturing and modernisation plant, TMH aims at becoming a market leader in Hungary and at serving the European railway market.

For Dunakeszi acquisition, in November 2019, the agreement for the procurement of 90% of shares previously belonging to MNV National Asset Management Agency and to MAV Railways was signed. In May 2020, the national competition authority gave its approval on the transaction. Under the project, a technology and production transfer will start between  Dunakeszi facility and TVZ plant in Russia, where the second half of the coaches for Egypt is being manufactured.

In Hungary, TMH International and Magyar Vagon announced in July 2019 the establishment of two joint ventures, the TMH Hungary Invest and Transmashholding Hungary to carry out rolling stock modernisation and construction for the Hungarian and international railway markets.