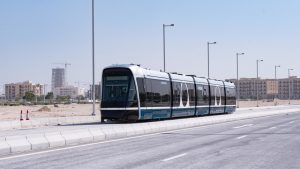 The line is served by 16 stations, of which one interchange station with the metro system, and has one depot and one viaduct crossing over Al Khor Expressway.

The network is operated by Citadis X05 new generation trams with a capacity of 209 passengers utilising both catenary and catenary-free technology the APS system.

“We are very proud of our major contribution to the completion of phase 1 of Lusail LRT Project, which will provide reliable and environmentally friendly transportation system for Lusail’s residents and visitors”, Mama Sougoufara, Managing Director of Alstom Middle East said.

In 2014, Qatar Rail awarded the LRTC Consortium comprising Alstom (40%) and QDVC (60%), a Qatari-based company in charge of civil works, the contract to develop a turnkey tramway system that is catenary-free above ground.

Each Lusail 32-m long tram is composed of five modules per single unit. The design and colour are inspired by the traditional Qatari boat, the Dhow, on the side of the rolling stock, we also note a pearl, a historical symbol in Qatar.

The vehicles are fully low floor to enable easier access for all passengers. The Lusail tramway turnkey system offers passengers a high level of comfort, and it includes passenger information and security systems both at station level and on-board. The trams are eco-friendly and equipped with a full electrical braking system and LED lighting.

The Lusail tramway system is operated by the RKH Qitarat joint venture for a period of 20 years under a contract awarded in 2017. The consortium, which also operates the Doha Metro, is formed by RATP Dev and Keolis (49 per cent) and Hamad Group (51 per cent).

The city’s tram system involves 4 lines (Red, Yellow, Green and Purple) and 28 stations with a capacity of up to 1,250 passengers per line, per hour in each direction. The light rail system connects with Doha Metro at Lusail and Legtaifiya stations.