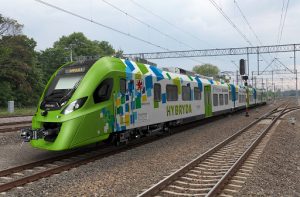 Olgierd Geblewicz, the Marshal of West Pomeranian Voivodeship, Tomasz Sobieraj, the Deputy Marshal of the voivodeship and Zbigniew Konieczek, the president of Newag have signed a contract for the supply of two Impuls 2 hybrid electric and diesel trains.

Through this agreement, Western Pomerania is the first region in Poland to put into commercial operation hybrid trains.

The Impuls 2 hybrid train is the first Polish rail vehicle which, apart from electric engines, also has diesel engines, which allows it to travel on non-electrified railway routes. Combining innovative technologies in the new train has resulted in a much wider range of the vehicle application by train operators.

The hybrid multiple unit has a capacity of 330 passengers including 160 seats. Additionally, the multiple unit is equipped with a passenger counting system and interior monitoring. The interior of Impuls 2 type 36WEh is adapted to the needs of passengers with reduced mobility, which enables them to travel comfortably and safely. The vehicle also has WiFi, air-conditioning, electric sockets, USB ports and an application which displays the train’s route.

Starting 2013 until 2018, the West Pomeranian region has expanded its train fleet by 40 trains of the Impuls family, of which 22 Impuls type 31 WE and 18 Impuls 45WE. By these procurements, the region has the most developed and new rolling stock fleet for passenger transport.