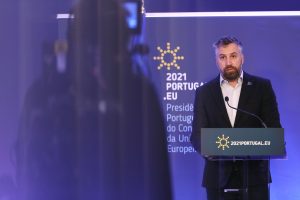 On March 29, Pedro Nuno Santos the Minister for Infrastructure and Housing of Portugal and Adina Vălean the European Commissioner for Transport have officially kicked-off the European Year of Rail by presenting the Connecting Europe Express train, one of the most emblematic projects organised within the EU initiative. The event took place on the eve of an informal meeting of EU transport ministers focusing on different ways to accelerate a modal shift to rail.

“Rail is a priority for the Portuguese Presidency of the Council of the EU and it will be the main topic at the ministerial meeting. The modal shift towards rail is the key to transform the transport sector and to reduce the impact on the environment,” Pedro Nuno Santos said.

The train will begin its journey in September from Lisbon travelling across the EU linking many capitals including Ljubljana, with ending stop in Paris, to promote the many benefits of rail for passengers, freight and the environment. “The journey will take us between the two EU Presidencies of 2021, with a few detours along the way, to the first Presidency of 2022 led by France. The Connecting Europe Express will be a real, tangible example of the power of rail to connect. At each of the almost 40 stops, events will bring together the rail sector at large, as well as civil society organisations, local and regional authorities, and the wider public, to discuss the benefits of rail, as well as what still has to be done so that rail can become the number one option for passengers and business. The European Year of Rail was chosen to highlight the EU Green Deal’s objectives to transform a sustainable mobility and economy,” Adina Vălean said. 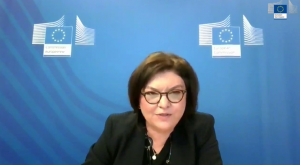 The Connecting Europe Express is unique in many ways. For example, railway companies from different EU Member States are providing rolling stock to configure this train. Coordinated by the Community of European Railway and Infrastructure Managers (CER), the project will be run not only in cooperation with European rail operators, but also infrastructure managers.

The Connecting Europe Express train will not only highlight the interoperability and the uninterrupted rail services but will also cross the EU’s external borders “visiting friends and partners such as Switzerland and Serbia. We are proud of our international cooperation on rail,” Vălean explained.

The train will cross on three gauges and will be equipped with the needed technologies to “reflect the benefits rail offer to the people, businesses and freight.”

The project will also raise awareness of the importance of financing sustainable infrastructure such as rail, and EU support for such investment, including through the recently agreed new Connecting Europe Facility (CEF), worth EUR 33.7 billion, as part of the next long-term EU budget 2021-2027. The train’s journey is possible thanks to good cooperation between European rail operators and infrastructure managers.

For a smooth and safe mobility, the digitalisation is essential. The ERTMS will offer its potential to achieve a single and unified railway network. The speakers underlined the importance of the technology and digitalisation and the necessity of a common policy concerning the standards and norms to creare a single European rail area.

The European funding reflects rail’s key role for the future of transport. In the period 2014-2020, CEF Transport contributed to the decarbonisation of the European economy by investing heavily in environmentally friendly transport modes, including 266 railway actions across the EU. The CEF funding allocated to railway actions accounts for EUR 16.3 billion, 72% of the total CEF Transport funding.

In March, the Council and the European Parliament agreed on the next Connecting Europe Facility, the CEF 2.0, with a budget of EUR 25.81 billion including EUR 11.29 billion for cohesion countries.

Rail, a safe, innovative and sustainable transport, will contribute to the decarbonisation of the European transport sector and will help EU to meet the Green Deal objectives, which will be achieved by the new Mobility Strategy.