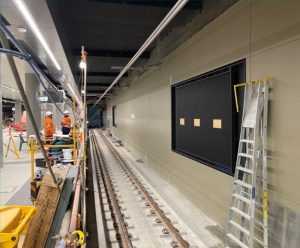 Following the energisation of the new alignment in mid-February of Forrestfield Airport rail link the test trains will start to put Perth’s new rail line in operation in the first half of 2022.

In the recent weeks, a lot of progress has been made in getting the tunnels ready for the first test train to run its maiden voyage. Infrastructure to power the trains and stations is nearing completion, commissioning is underway for the pipes carrying firefighting water, 850 of 1700 tunnel emergency lights have been installed and connected, and the signalling systems have exceeded the 90% completion rate.

The rail track has been installed in July and currently are performed the final touches and profile grinding for the new rail connection. A truck-mounted grinding machine travels up to five times across each section, grinding at several angles to ensure that irregularities are removed from the track.

The final shutdown of the Midland Line, required to connect the many complex systems of the Perth Airport Line to the wider network, is planned for mid-February. Following this will be several stages such as test train running, driver training, and practical completion of all associated infrastructure, before passenger services can commence.

At the western end of the line tunnels, the Bayswater Junction portal building is about to enter the commissioning phase. During this phase tests are run to confirm that all systems and components of the building operate as per requirements. Outside of the portal building a large pole has recently been erected. The pole is required to ensure radio communication across the project performs seamlessly. Also seamless is the airflow between the three tunnel ventilation fans on the top level of the portal building and the tunnel entries, with the duct work now complete.

Suspended over the eastern void between the concourse and platform levels, aluminium branches and leaves have been installed as part of the public artwork at Redcliffe station. Passengers will be able to view this colourful and organic focal point within the building architecture from different angles. Room for creative art of a different kind will be provided in the form of large advertising screens, recently installed at platform level. As quickly as they went in, they were covered up with metal panels for protection during the final stages of construction. At the nearby 500-bay car park hard landscaping and permanent fence installation is underway.

Work on garden beds along the southern façade has commenced at Airport Central Station. Seven mature ‘Snow Queen’ coolibah majes-trees will eventually rule the domain, loyally supported by grass trees and banksias, with the remainder of the commonality made up of native plants such as kangaroo paws, buttercups and cottonheads. Inside the station building, tiling works are underway on the steel stairs connecting the concourse and platform levels, and vinyl flooring has been laid within the mezzanine area. The first lot of information screens has also been installed, ready to assist passengers with their journey.

At High Wycombe station two bike shelters are under construction which will provide convenient, secure, and free parking for 180 two-wheelers. Fencing is being installed around the two storm water basins within the station precinct. This concludes work for the basin next to the multi-deck car park, where planting of tube stock was completed in November.

The AUD 1.86 billion (USD 1.3 billion) Forrestfield Airport rail link is jointly funded by the Australian and Western Australian governments and will deliver a new rail service the eastern suburbs of Perth. The project included the construction of an 8.5 km line served by three stations, one of which at the Perth Airport. In the first year of operations the Airport Line is expected to generate 20,000 passenger trips on the network every day, increasing to 29,000 daily by 2032.