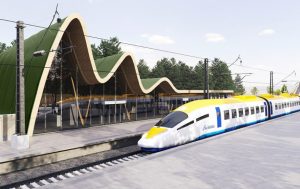 LTG Infra the company responsible for the implementation of the Rail Baltica project in Lithuania, signed two contracts covering the planning of the Panevėžys railway node and the design of regional stations and engineering systems from Kaunas to the Lithuanian-Latvian border.

Both tenders worth EUR 1.7 million were awarded to Kelprojektas and Kelvista.

The EUR 950 thousand contract for Panevėžys railway node coves the provision of services for the engineering infrastructure development plan and environmental impact assessment (EIA) for transport communications of the railway infrastructure. The service delivery term is 24 months.

According to the other tender, the service provider will have two years to prepare the development plan for the engineering infrastructure and the engineering systems of transport communications of regional stations of the Rail Baltica railway line between Kaunas and the Lithuanian-Latvian border. The value of this tender is almost EUR 740 thousand excluding VAT. According to the plans, at least five stations are expected to serve the railway route from Kaunas to the Lithuanian-Latvian border which will connect the regions to the Rail Baltica.

The contractor will have to assess the current situation, provide general and specified solutions, prepare alternatives to the development of Rail Baltica, identify specific land taken for public needs, as well as assess the environmental impact of the planned infrastructure.

This year, AB Eurovia Lietuva was awarded the first construction contract for the Kaunas-Latvia border on the Rail Baltica. The EUR 6.6 million contract covers the construction of the 12.2 km Šveicarija-Žeimiai rail section situated in Jonava district Municipality. In Lithuania, Rail Baltica covers the route between Panevėžys and Kaunas to the Lithuanian-Polish border and the Kaunas – Vilnius connection. In Kaunas, the freight terminal has been put into operation in 2021.