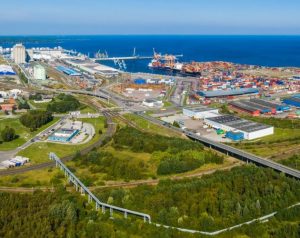 Rail Baltic Estonia has launched the tender for Muuga freight terminal design which will be Rail Baltica’s single cargo terminal connected to the harbour. The interested companies can submit their proposal until 19 June 2020.

“Muuga freight terminal is one of the most important objects of the project in terms of Rail Baltica freight transport, the development of which will increase the value and competitiveness of both the railway and Muuga Harbour. Connecting the most important cargo port in Estonia with the railway will be an ambitious task for any engineering company,” said Tõnu Grünberg, Chairman of the Supervisory Board of Rail Baltic Estonia.

The winner will be responsible for design of the freight station, the terminal connections and the infrastructure directly related such as a railway tunnel, catenary, traffic control systems, control centre and maintenance depot. The designed will also must find a solution for nearby objects, such as the Maardu road junction and Põhjaranna road viaduct.

The terminal will also create an important connection for freight flows on a new north-south corridor.

The Muuga freight terminal will handle 4-5 million tonnes of goods following the completion of Rail Baltica corridor. The analysis completed by Civitta Eesti and Deutsche Bahn Engineering & Consulting GmbH in 2018 shows that in 20 years these volumes may even double and 8-10 million tonnes of goods will be handled in Estonia’s most important cargo port every year.

The two companies have studied the prospects of trade from Muuga, while Reaalprojekt OÜ has helped to improve the technical solutions. At the beginning of 2020 a prospective operation plan for Muuga Harbor was completed by Ramboll Deutschland which analysed various alternatives for the construction of a multimodal cargo terminal and infrastructure at Muuga Harbor. The proposed solution focuses on the creation of a comprehensive port infrastructure, and maximization of synergies, linking Rail Baltica with the existing port infrastructure, by using the resources and potential of the operators/cargo terminals operating in Muuga.