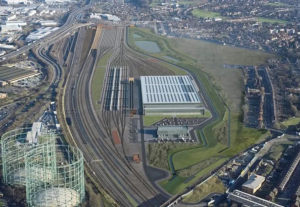 HS2 has initiated the process to identify a specialist contractor to build the Birmingham’s Washwood Heath depot, the high-speed rail project’s central control centre and maintenance facility. The bidders are expected to be shortlisted for the single-stage design and build contract in the summer with contract award in 2023.
The contract is estimated at £275 million (EUR 317.3 million).

The depot, which will be located next to the main line into Birmingham Curzon Street, will service and maintain the HS2 train fleet 24 hours a day seven days a week with up to 500 staff working in shifts.

The depot will include a 40,000 m2 rolling stock maintenance building, carriage wash, automatic vehicle inspection building and 14 sidings where trains can be stored overnight.

Also on the same site will be the network integrated control centre, the centre of the network’s state-of-the-art signalling and control systems as well as office buildings for cleaners and drivers.

“The start of the search for a contractor to build Washwood Heath is a real milestone for the HS2 project and a huge long-term opportunity for the area. With main works civils construction now well underway, we are putting the specialist team in place to support operation of the new railway,” HS2 Ltd’s Commercial Director, David Poole said.

The Washwood Heath depot will transform 30 – hectare brown field site into the nerve centre of the HS2 network.
Once operational, the Phase One and 2a will have a fleet of at least 54 trains which will be based at Washwood Heath. These 200-metre-long units can be doubled up to create 400m long trains and will serve destinations beyond the HS2 network like Liverpool, Preston, Carlisle and Glasgow, via a connection to the existing West Coast Main Line at Crewe.

The Washwood Heath site was formerly home to the disused Metro-Cammell railway works which closed in 2004. A team from HS2’s early works contractor LM, completed the demolition of the buildings on the site last year, ready for the start of construction. The LM joint venture comprises Laing O’Rourke and J. Murphy & Sons and will deliver a dynamic enabling works programme for HS2’s phase one across the West Midlands.

The HS2 will provide Britain the much-needed rail capacity linking up London, the Midlands, the North and Scotland serving over 25 stations. Recently, the construction of the Phase 2A received Royal Assent.