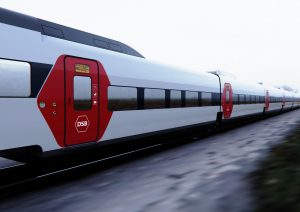 Danish state railways company DSB awarded Talgo a contract for the supply of 8 standard locomotive- hauled cars with a capacity of over 440 seats each. Under the contract, the Spanish company will also deliver spare parts for a period of 16 years.

The contract is a framework agreement allowing DSB to procure both more single coaches and full formations, depending on the demand.

Starting 2023, the train will enter services on the Copenhagen – Hamburg route, running at speeds of 200 km/h.

The much lighter trains enable a 30% reduction of energy consumption, allowing a further reduction of carbon emissions from rail transport. This will help Denmark to reach its committed to cut carbon emissions by 70% from the 1990 level before 2030, and to become carbon-neutral no later than 2050.

The train is an iteration of the Talgo 230 conventional intercity platform, the same already chosen Deutsche Bahn. The Talgo 230 train sets are tested and they are fully aligned with the demanding technical rules enforced in Denmark and Germany, while also complying with the TSIs.