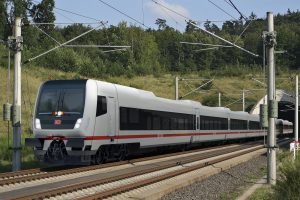 Talgo awarded EKE-Electronics a ‘significant’ train communication and management system (TCMS) contract for Deutsche Bahn ECx trains. The total value of the initial award is ‘several million euros’, and it covers 23 ECx trains with options on up to a total of 100 train sets. Each train has 17 coaches and a locomotive.

The initial order includes 1500 vehicle control units (VCU) and remote IO modules (RIOM) with options for up to 6000 units in total.

The scope of the delivery also includes several critical SIL-2 (Safety Integrity Level) compliant safety functions integrated to the TCMS, such as detecting instabilities in bogies and wheelsets, brake failures and supervision of various train components.

The first equipment will be delivered in 2020 with the development of the SIL2 functionalities continuing to 2021.

The full TCMS with SIL2 functions will be certified and operational by the end of 2023.

The whole delivery is based on Trainnet Train Control and Management System (TCMS) which provides a single point of control over all train sub-systems. It enables control and monitoring over virtually any sub-system and function, for instance, doors, brakes, PIS/PA, and video surveillance.

In 2019, Talgo signed a EUR 550 million framework agreement to deliver 100 trains with a firm order for 23 ECx trains which will enter commercial operation in 2023 on a cross-border route from Berlin to Amsterdam.

The new trains will cut the travel time by 30 minutes to 5 hours and 50 minutes. The new vehicles will also be used on tourist connections to Westerland (Sylt) and Oberstdorf, covering tourist destinations on the North Sea and in the Alps. Starting in summer 2024, there are plans to use the new trains on the Westerland–Cologne, Westerland–Frankfurt–Karlsruhe, Westerland–Berlin and Oberstdorf–Cologne routes.

The locomotive-hauled passenger coaches are highly versatile, expanding DB’s long-distance fleet which will increase the capacity. Each single train is comprised of one multi-system locomotive and 17 passenger cars. The trains have 570 seats, with 85 in first class and 485 in second. The trains can run at a top speed of 230 km/h.