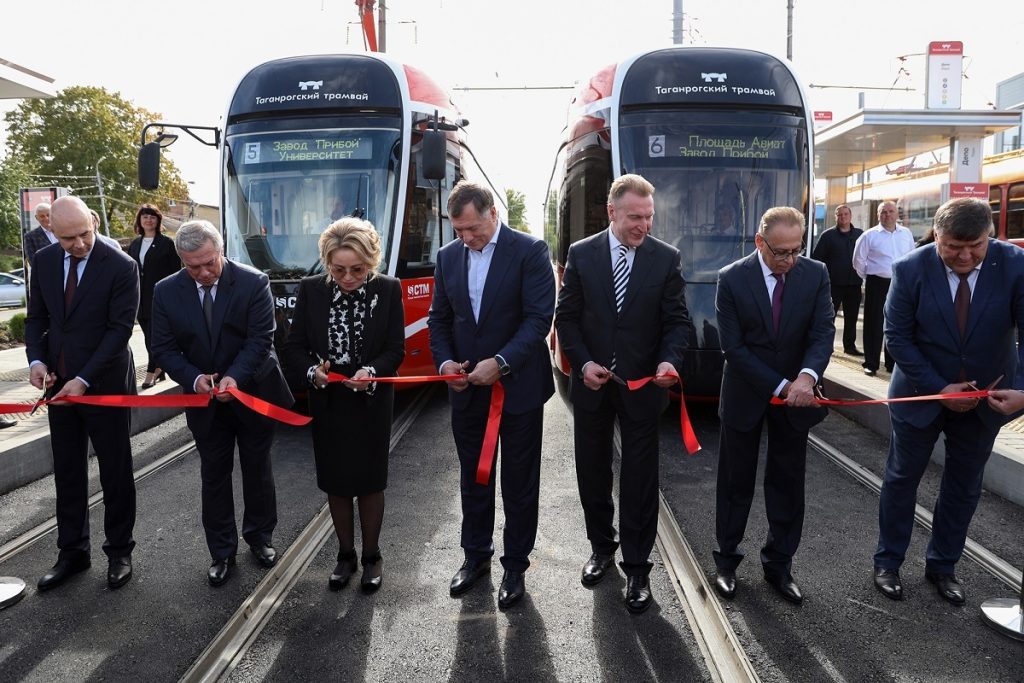 The Chairwoman of the Federation Council of the Federal Assembly of Russia, Valentina Matviyenko, inaugurated two new lines extending the Taganrog tram network by 16 km and 19 stations. Taganrog is a port city in Rostov Oblast, southwestern Russia. The 8 km route 5 crosses the city on the north-south axis providing access to several large enterprises located in the north part with the final stop is next to the Priboy plant specializing producing sonar equipment, Krasny Gidropress plant and Research Institute of Communications.

“The most important thing is that Taganrog has reopened for all of us. This is a historical, unique city with its own history, beauty, which has great potential, and a modern public transport is needed” Valentina Matviyenko, Chairman of the Federation Council said at the ceremony.

The 8 km route No. 6 which also provides connectivity to these companies, connects the northern part of the city with the south-west.

The event was attended by the Deputy Prime Minister of Russia Marat Khusnullin, the Minister of Finance Anton Siluanov, the Chairman of the State Development Corporation VEB.RF Igor Shuvalov, the General Director of DOM.RF joint-stock company Vitaly Mutko as well as the Governor of the Rostov Region Vasily Golubev. The delegation made an official trip towards the modernised tram depot and to a new control centre built by Sinara Group which is responsible for the modernisation of the tram infrastructure and LRV supply.

A unified traffic control centre has also been constructed based on a unique interface containing a mnemonic diagram that allows the management of the entire tram infrastructure of the city in real time with automated route planning, traffic dispatching along routes, reporting data on public transport activities.

“Our system monitors 65 car parameters, both technical elements and those related to passenger comfort including the temperature in the car, lighting level, etc. It provides communication with the driver, the ability to control the car by a dispatcher, and video surveillance in the car. The dispatching system provides for the possibility of expansion by covering other urban transport systems, for example, electric buses,” Mikhail Khodorovsky, the General Director of Sinara Group said.

In May 2021, the Government of the Rostov Region and Sinara – City Transport Solutions Taganrog signed the concession agreement to modernise Taganrog tram network and deliver new light rail vehicles. The concessionaire has replaced 45.5 km of tram lines and 8 traction substations, has reconstructed the depot, and installed information systems at 102 stops. Sinara has also delivered 50 new and modern light rail vehicles.The entire project is scheduled to be completed by the end of 2022.

The Mobile City national programme aims at modernising and developing public transport systems in Russian cities and their metropolitan areas. The initiative supports the development of the transport networks, the procurement of new and modern vehicles and installation of smart systems delivering citizens increased access to transport services with expanded connections, as well as safer and more comfortable journey.