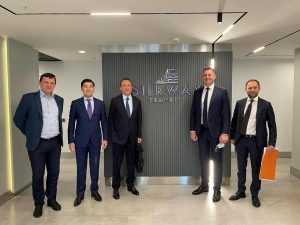 Sinara-Transport Machines and Silkway Transit, the largest cargo operator in Kazakhstan, signed a contract for the supply of 22 2ES7 Black Granite locomotives which will be manufactured at Ural Locomotives plant.

The delivery of the first two-section electric locomotives is expected to start at the end of 2021 and within nine months, the ordered vehicles will be handed over to Silkway Transit.

The locomotives will enter trial operation running 3,000 linear kilometres and following successful tests, they will enter commercial operation on the main lines in the Republic of Kazakhstan.

The contract is the largest export projects in the history of STM company. “The agreement opens up new opportunities and now we are negotiating to provide service maintenance for the supplied electric locomotives,” Anton Zubikhin, the General Director of Trading House STM said at the signing ceremony.

The Black Granite locomotives are designed for heavy traffic on railway lines of alternating current of the CIS countries. They are equipped with an asynchronous traction drive that provides a high traction power to haul increased-length extra heavy trains. Two-section AC freight electric locomotive can drive a train weighing 9,000 tonnes in sections with a flat track profile (up to 6‰) and a train weighing 6,300 tonnes in sections with a mountain profile (up to 10‰). It is possible to operate an electric locomotive in a system of many units, and autonomous operation of one section of an electric locomotive is also possible.

Due to modular arrangement of equipment, the vehicles are providing a high maintainability and the time between repairs is increased by 5 times.

The locomotives are designed with a maximum speed of 120 km/h.