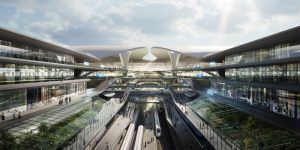 Following the TEN-T Regulation review, the Solidarity Transport Hub project in Poland entered the European TEN-T network. The Solidarity Airport, the extension of the Central Trunk Line northwards and the railway lines from Ostrołęka via Łomża to Giżycko, from the vicinity of Stalowa Wola to Rzeszów and from Milanów via Biała Podlaska towards Siemiatycze have been added to the EU’s investment priorities for the coming years. This opens further opportunities for Centralny Port Komunikacyjny (CPK) sp. z o.o to obtain EU funding for the projects.

“In the European Commission’s opinion, the key investments within the STH Programme should constitute priorities for EU investment policy, and their implementation should become Poland’s contribution to the European transport system. This is very good news, which opens up the possibility for our company to successfully apply for further EU funds,” Marcin Horała, the government plenipotentiary for STH said.

The TEN-T core network includes the Warsaw-Łódź-Poznań/Wrocław high-speed railway line prepared by CPK (the so-called “Y” line). The requirements are that the core network should be completed by Member States, using EU funds, by the end of 2030. This is in line with the company’s investment plans. According to EU plans, the Warsaw-Łódź-Poznań-Wrocław railway route is a part of the North Sea – Ba tic European Transport Corridor. In the company’s investment plans, this is the “spoke” no. 9 line.

The review also includes the “spoke” no. 7, being the Katowice-Ostrava section through Jastrzębie Zdrój with almost 90,000 inhabitants, currently the largest city in Poland without access to the railway network. This Polish-Czech cross-border project of the company will become part of the Baltic – Adriatic corridor. It was also included by Brussels in the extended TEN-T core network.

The Solidarity Transport Hub also covers three sections currently being prepared which have been included in the TEN-T comprehensive network.  The aim is to reduce transport exclusion providing increased access and to better integrate the Polish network. According to the EC, the implementation of the projects should be completed no later than in 2050 while company’s plans estimate that the longest of the railway investments will last until 2034.

The CPK is preparing the construction of a total of 10 railway spokes, leading from different regions of Poland to Warsaw and the new airport. In total, there are 30 investment tasks and nearly 1,800 km of new railway lines to be completed by the end of 2034. The investments are prepared in cooperation with investors from the neighbouring countries, such as the Czech rail infrastructure manager Správa železnic for the Katowice – Ostrava and Wrocław – Prague lines.