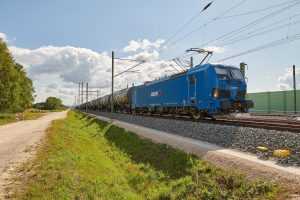 Cargounit, the Polish locomotive leasing company, and Siemens Mobility signed a contract for the supply of the first two Smartron locomotives which will operate the Romanian rail network.

The Smartrons which will enter Cargounit fleet were purchased for the Romanian market, although the locomotives are also approved for operation in Germany and Bulgaria.

The vehicles weigh about 83 tonnes and are designed for 1435 mm gauge lines. They have a power output of 5.4 MW with a maximum speed of 160 km/h. The vehicles will be delivered sequentially in Q3 and Q4 2022.

“The delivery of two Smartron locomotives to the Romanian market in 2022 will be a milestone in Cargounit’s development, which will strengthen our position as a leading entity in the field of locomotive rental in Central and Eastern Europe. We see a growing demand for modern locomotives in the rest of the Tri-Region countries and we are happy to pioneer the Smartron dedicated locomotive rental offer for the Romanian market,” Łukasz Boroń, CEO of Cargounit said when took the delivery of Vectron MS locomotives.

The two Vectron MS locomotives have a power output of 6.4 MW AC and 6.0 MW DC and were equipped with the ETCS system in accordance with the current specifications (Baseline 3). The locomotives are intended for operation in Poland, Germany, Austria, the Czech Republic, Slovakia, Hungary, Slovenia, Croatia, Serbia and Holland, and optionally in Romania and Bulgaria. What is extremely important, the vehicles from the Vectron platform have already been approved for operation in as many as 20 European countries.

In 2019, the two companies signed a contract for the supply of five Vectron multi–system locomotives and including the maintenance services.