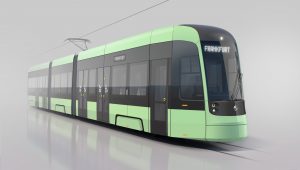 Three cities of German federal state of Brandenburg awarded Škoda Transportation a contract to deliver ForCity Plus low-floor trams under a pan-European tender announced by the three companies of public transport.

The contract, which has a total value of 3 billion crowns (EUR 110 million), covers the delivery of 24 low-floor trams and includes an option for 21 additional vehicles.

Frankfurt an der Oder, Brandenburg an der Havel and Cottbus are the three cities which will receive ForCity Plus vehicles to replace the existing high-floor trams, which are nearing the end of their service life.

Under the contract, Škoda Transportation will deliver 13 trams to Frankfurt, four and perhaps eight more from the option will go to Brandenburg an der Havel, and the remaining seven plus 13 from the option were ordered by Cottbus.

The new trams will increase the attractiveness of public transport in all these three cities. The ForCity Plus low-floor trams will be low-floor and are therefore also ideal for people with reduced mobility.

The new vehicles will be air-conditioned and barrier-free, will have multifunctional spaces for prams, wheelchairs and bicycles. The new trams will have an easy-to-understand information system with several screens and panels. The tram will also be equipped with a camera system for a better overview of the driver and increased traffic safety.

The trams are environment and economic efficient and low operating costs.

The ForCity Plus unidirectional three-section trams are 70% low-floor vehicles with two radial and one non-radial bogie.

This is the first tender in which the contracting authorities requested technically identical vehicles for three significantly different cities. “The winner of the tender won thanks to its modern vehicle concept and the implementation of basic low-floor, space utilisation and energy efficiency requirements, as well as its modern, timeless design,” Christian Utuk, CEO of Frankfurt transport company SVF, said.

For the Škoda Transportation, this means another success in Brandenburg, where low-floor trams are already operating in Schöneiche-Rüdersdorf. In addition, 14 Škoda ForCity Classic trams are in operation in Chemnitz, and a contract for ForCity Smart low-floor trams for Mannheim, Heidelberg, Ludwigshafen and Bonn is currently ongoing.