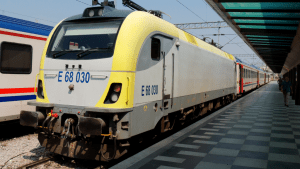 Škoda Transportation Group and Hyundai Rotem signed a contract for the delivery of locomotive equipment for the new vehicles that will run on the 550 km Dar es Salaam – Makutupora rail line, in Tanzania. The vehicles will have to cope with difficult climatic conditions and large differences in altitude.

Under the CZK 580 million (EUR 22.84 million) agreement, Škoda Transportation will supply 17 sets of complete electrical equipment for the new locomotives.

Škoda says that the project for Tanzania is technically very interesting. “We will supply complete equipment, including main and auxiliary drives, battery chargers, traction motors, gearboxes and wheelsets. The locomotives will run on the route at a speed of up to 160 km/h, which in local conditions represents a significant acceleration of transport compared to the usual standard,” Karel Majer, the Sales Director of Škoda Electric said.

The final assembly of the locomotives will take place at the Hyundai Rotem production plant in Changwon, South Korea.

This year, Tanzania Railway Corporation (TRC) awarded Hyundai Rotem a KRW 335.4 billion (USD 280.67 million) contract for the delivery of 80 electric multiple units and 17 electric locomotives expected to be delivered by 2024.

The electric locomotive equipment supplied by Škoda will power the vehicles to run on the 550 km new electric standard gauge railway (SGR) linking Dar es Salaam and Makutupora through Morogoro. The entire SGR connection will have a total length of 1,219 km estimated at up to USD 7 billion.

“The current order builds on previous successful projects that we have already implemented with the Hyundai Rotem group. In recent years, for example, there has been a significant delivery of several dozen locomotives to Turkey,” Bedřich Koukal, the CEO of Škoda Electric said.

Under the partnership, the Czech company has produced complete equipment for 80 locomotives for the Turskih rail company TCDD. In April, Škoda has completed the delivery of the traction equipment for six 2-car trains manufactured by Hyundai Rotem for Incheon Metro, a city near Seoul. For these vehicles, Škoda Electric has supplied traction motors and converters (traction and auxiliary ones) for Woojin company.