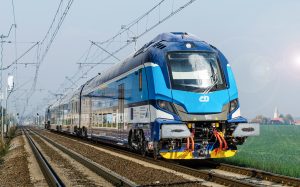 The manufacturer says that until the end of the year, the train will start running in trial operation on the line between Ostrava, Frýdek-Místek, Frýdlant nad Ostravicí and Frenštát pod Radhoštěm.

“These are the first trains of this type in the Czech Republic, which will be in the basic set consisting of one driver and two inserted cars. In operation, they will be complemented by modified 750 series locomotives from the ČD fleet. In this composition, the push-pull trains, can quickly change direction at the destination station without a long movement of the locomotive. This will contribute to speeding up traffic and shortening travel times, ” Jiří Ješeta, Member of the Board of Directors and Deputy Director General of ČD for Trade said.

The double-deck push-pull train has a total capacity of 356 356 seats and are partly low-floor for barrier-free access from platforms with a height of 550 mm.

The three-car trainset is designed for regional transport with comfortable 2nd class seats and at the same time there is also a small first-class compartment. The spacious trains provide multifunctional areas allowing the transport of up to 30 bicycles, prams, bulky luggage and up to 40 pairs of skis.

At the same time, the push-pull train is adapted for the transport of blind passengers and enables the transport of up to four disabled people in wheelchairs with an escort. For blind and partially sighted passengers, one of the doors of the driving car is equipped with a remote-control blind transmitter and an acoustic beacon. An essential part is also a modern audiovisual information system providing information on train movements and stops to all passengers, including the passengers with disabilities.

The microprocessor control system allows one driver to control the train from the cab of the driving coach or locomotive without the presence of another person. The train is equipped with the ETCS, a modern information system, a ticket validator for contactless purchase and Wi-Fi internet connection.

The trains are designed to operate at a maximum speed of 160 km/h.

“The great advantage of the train is its flexibility and modularity. This is because it can be connected and guided both with an electric locomotive and also, for example, with a diesel locomotive, so operation on both electrified and non-electrified lines is possible,” said the Deputy Chairman of the Board of Directors of the Škoda Transportation group, Tomáš Ignačák.

In 2019, ČD and Škoda signed two train contracts totalling CZK 7 billion (EUR 274.45 in current prices), of which CKZ 1 billion (EUR 39.2 million) is the value of the five double-deck push-pull coaches.