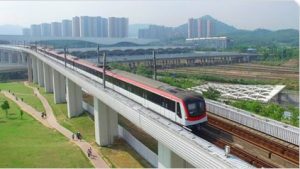 Under the contract signed with Shenzhen Municipal Government, the MTR and EEB will be responsible for the investment, construction and operation of the line for a term of 30 years after its completion.

The Line 13 PPP project will be undertaken by a joint venture company in which MTR Consulting will own 83%, EEB 15% and 2% will be owned by a subsidiary of the Shenzhen Municipal Government.

“We are delighted to be awarded the Line 13 PPP project and to participate in the railway network development of Shenzhen again after Shenzhen Line 4 and Line 4 North Extension,” Jacob Kam, CEO of MTR Corporation, said.

RMB 4.91 billion (EUR 595.86 million) is the value of the project which will be financed by debt and equity.

The civil construction works part of the project will be carried out by Shenzhen Metro Group Co, the owner of the metro transport system.

The Shenzhen Metro Line 13 consists of the construction of a 22.4 km-long metro line served by 16 stations. The new metro line will provide transport connection from south to north in central Shenzhen. It will run from through Bao’an and Nanshan districts linking the Bay Immigration Checkpoint to Xili Lake near Shenzhen University. The line is expected to be opened for passenger services in 2023.

The Line 13 is one of the four new metro lines which are to be developed under the fourth phase of Shenzhen Metro expansion project.  Shenzhen Metro Group completed three phases of the construction of the lines 1, 2, 3, 5, 7, 9 and 11 as well as the southern section of Line 4. MTR Corporation Shenzhen is responsible for the investment and construction of the phase II project of Line 4 (the Longhua Line). It has been granted franchise rights to operate the Line 4 for a period of 30 years.