“India’s needs of the 21st century cannot be met by the modus operandi of the 20th century. Therefore, there was a need for a fresh reform in the railways. The results of efforts to develop railways not just as a service but as an asset are visible. Major railway stations across the country are being modernised. The railway stations in Tier 2 and Tier 3 cities are now equipped with Wi-Fi facilities. The unmanned railway crossings on broad gauge have been completely eliminated to enhance safety of the people,” Modi said. 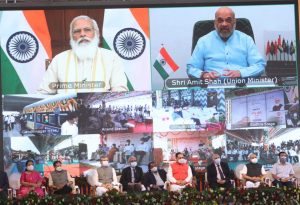 The Prime Minister explained the critical role played by railways in a vast country like India which brings “new dimensions of development and new dimensions of facilities. Due to the effort of the last few years, today trains are reaching the capitals of the North East for the first time.”

Along with Ahmedabad city, the rail projects in Gujarat provide the municipalities fast access to rail services and increased rail connectivity. The Vadnagar, a municipality in Mehsana district in the Indian state of Gujarat, has become part of the rail expansion, providing modernised stations and enhanced rail connections. With the construction of this new broad – gauge line, the Vadnagar – Modhera – Patan heritage circuit is now connected with better rail service”, the Prime Minister said.

The projects covered the modernisation of Gandhinagar and Vadnagar stations, widening and electrification of the 55-km Mahesana – Varetha line, the electrification of 264 km Surendranagar – Pipavav section and the commencement of the two train services.

USD 50 million was the value of the Mahesana – Varetha line project that through its ten stations connects the Ahmedabad – Delhi railway line and the Vadnagar – Modhera – Patan heritage circuit.

The electrification of Surendranagar – Pipavav has been completed by a USD 39 million investment and is an important rail Pipavav Port connectivity as well as a feeder route for the Western Dedicated Freight Corridor. This rail route is going to ensure smooth movement of double stack container trains from Pipavav Port to the northern parts of the country.

“Efforts are being made to increase the speed of trains either through the modernization of infrastructure or introduction of new modern trains. The speed of trains will increase further as soon as the dedicated freight corridors become operational in the days to come,” Modi explained.