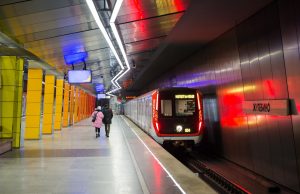 Rosstandart, Russia’s Federal Agency for Technical Regulation and Metrology has published the first part of a national standard for metro system, which is developed based on the experience of Moscow Metro.

56 terms were identified as the main ones and included in the final edition of the single metro standard concept.

Approved earlier by the order of Rosstandart, the GOST, which is the Russian set of standards approved by government, the “Metro Systems. Basic Terms and Definitions” was introduced on November 1, 2020. The document preparation, which underwent under the leadership of the Moscow Metro, lasted over 30 months.

The adoption of the GOST is the first stage of the programme adopted by the Technical Committee for Standardisation on the metro systems, created on the initiative of Moscow Metro company. The document will become the basis for further activities of the Committee.

There were two reasons to elaborate a single and independent regulatory and technical base, which are specific of the metro as an urban transport, and lack of common national standards. For this purpose, the Technical Committee for Standardisation “Metro Systems” was established in 2017. Besides elaborating terms and definitions, the Committee is responsible for developing standards in the field of information technology, passenger services, transport security and other areas of metro operations.

The preparation of the national standard for metro system in the context of the hardships, which Russia and the world suffered from, has demonstrated the need to gradually transfer all stages of the development and approval of standards into electronic format. This will allow eliminating interference in the interaction of technical committees and authorities, as well as increasing the efficiency of all agents responsible for the standardisation process. Thus, the national standard is designed to create new opportunities for the development of metro systems, taking into account the negative epidemiological background.

“Standardisation is indeed important for urban rail, as it can create common specifications which make manufacturers produce interoperable products, which in turn can lead to products being cheaper and decrease vendor lock-in situations. Well-designed standards can also improve rail systems, for increased safety for example. Good standards should always be adequate and not create unnecessary burden and costs. In this regard, the initiative in Russia which recognises the specifics of the metro as an urban transport, moving away from considering them as an integral part of rail transport, seems like a positive development,” Yves Amsler, UITP’s EU Department expert on standardization said.

Currently, there are seven metro systems in Russian cities. Moscow Metro is one of the world’s largest metro systems comprising 789 km of tracks (17 lines) served by 335 stations. Works are carried out and plans are developed to double the length by 2023.