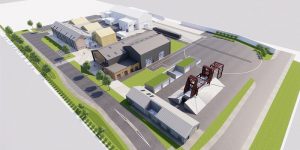 The rail industry and civic leaders are urging the Britain Government to accelerate construction of an advanced rail research institute that would provide a “game-changing opportunity for the UK”.

According to the University of Leeds, the rail industry wants the institute to be operational in two to three years to help the sector deliver on the massive taxpayer investment in rail, expected to be in excess of GBP 200 billion (EUR 223.8 billion) over two decades. That would require building work on the institute to resume in a matter of months.

The Institute for High-Speed Rail and System Integration, being developed by the University of Leeds, will be one of the most advanced rail test and development centres in the world but building work was paused at the start of the pandemic in March, and it is not known how long the delay will last.

To enable building work to recommence as soon as possible, the University is asking the Government to underwrite the Institute’s capital costs. That would allow the test facilities to be operational in time to support the rail industry with its major infrastructure projects.

“The University of Leeds has already invested GBP 15 million [EUR 16.8 million] in the Institute, which will help create a global hub for advanced rail technology and manufacturing in the Leeds City Region.  The pandemic and the ongoing economic uncertainty have meant this important project is in threat of being delayed. With the government’s help, we can get the Institute back on track, support the creation of highly skilled jobs and pave the way for the UK to become a major exporter in fully-tested railway technology,” Professor Nick Plant, Deputy Vice-Chancellor for Research and Innovation, said.

The research facilities are designed to identify and eliminate the problems that have dogged other large rail infrastructure schemes, such as Crossrail, where new technologies fail to integrate, causing unexpected faults and breakdowns.

“The institute represents a game changing opportunity for the UK in both conventional and high-speed rail research and innovation. It will provide the UK with a whole system approach to railway testing, development, validation and certification, facilitated through closer industry collaboration. At Network Rail we are planning to utilise the facility to mitigate the delivery risks to some of our projects such as the Transpennine and East Coast Upgrades,” Peter Hendy, the chairman of Network Rail, said.

The institute is being developed by the University in partnership with West Yorkshire Combined Authority/Leeds City Region Enterprise Partnership, Leeds City Council, Research England and the rail industry on a site next to Leeds Enterprise Zone and the proposed HS2 rolling-stock depot, on the south east edge of the city. Along with many other universities, the University of Leeds paused its capital spending at the start of the first national lockdown and the timing of the construction of the IHSRSI research and testing facilities will be influenced by the ongoing COVID-19 pandemic.

The advanced rail research institute is part of a broader initiative to create a UK centre of excellence for high-speed rail engineering in the Leeds City Region. “The Institute for High-Speed Rail and System Integration is not only a game-changer for the UK but also at a local and regional level, because of the many skilled jobs and opportunities it will create and the major economic benefits it will bring,” Cllr Judith Blake, Leader of Leeds City Council, said.

The institute would house some of the most advanced rail testing facilities in the world, including a  specially designed vehicle testing rig – in effect, a rolling track that can test trains and carriages at speeds up to 250 mph, an infrastructure testing facility and a system-integration laboratory that will measure how well different railway technologies (power, track, signals and customer information services) operate as an integrated whole.