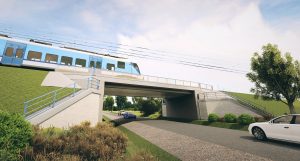 PKP Polish Railway Lines signed a contract for the modernisation of 21 bridges, viaducts and culverts on the Central Railway Line (CMK) to prepare the line to accommodate efficient and safe journeys.

The contract was signed with a consortium comprising Intop Warszawa and Sarinż. PLN 45 million (EUR 9.87 million) is the value of the contract which is covered from the state budget.

The construction works are planned for 2021-2022.
The contract represents the next stage of preparation of the route connecting Warsaw with Krakow and Katowice to increase the speed of trains to 250 km/h.

The contract covers the modernisation of 21 engineering structures on the Opoczno Południe – Pilichowice route in the Łódź Province. 4 railway viaducts in Budkowo, two Stawowice and Solec, and two bridges over the Opocznianka River are among the structures to be reconstructed. The structures of 15 culverts which, apart from water drainage, provide passages for small animals will be also modernised.

“Travel time is one of the most important factors that, according to research, encourages people to choose the railway. I hope that thanks to the modernization of the CMK, even more people will use the services of Polish railways.” Andrzej Bittel, the secretary of state at the Ministry of Infrastructure said.

PKP PLK has changed the technical conditions of the Central Railway Line to shorten the travel time. Since the new timetable, trains have already run along 16 modernised facilities on the Pilichowice – Olszamowice route. In October, safety in rail and road traffic was increased by two collision-free intersections, new viaducts over the CMK tracks in Kozia Wieś and Motyczna (Świętokrzyskie), replacing the rail-road crossings. More viaducts are being built in Radwan and Zachorzów Kolonia, in Łódź.

Under the project, two stations have been adapted to the passengers with reduced mobility, while the technical station in Idzikowice was also modernised. At the end of 2023, after all the works are expected to be completed and the ERTMS/GSM-R system and the ETCS level 2 system are operational, the CMK line will travel at speeds of up to 250 km/h.

The project is part of the second phase of the global project on the modernisation of the railway line No. 4 – Central Railway Line.
CMK provides railway links between Warsaw, Krakow, Katowice and Wrocław. It is also an important connection for the regional traffic for the inhabitants of Świętokrzyskie, Łódzkie and Mazowieckie provinces.