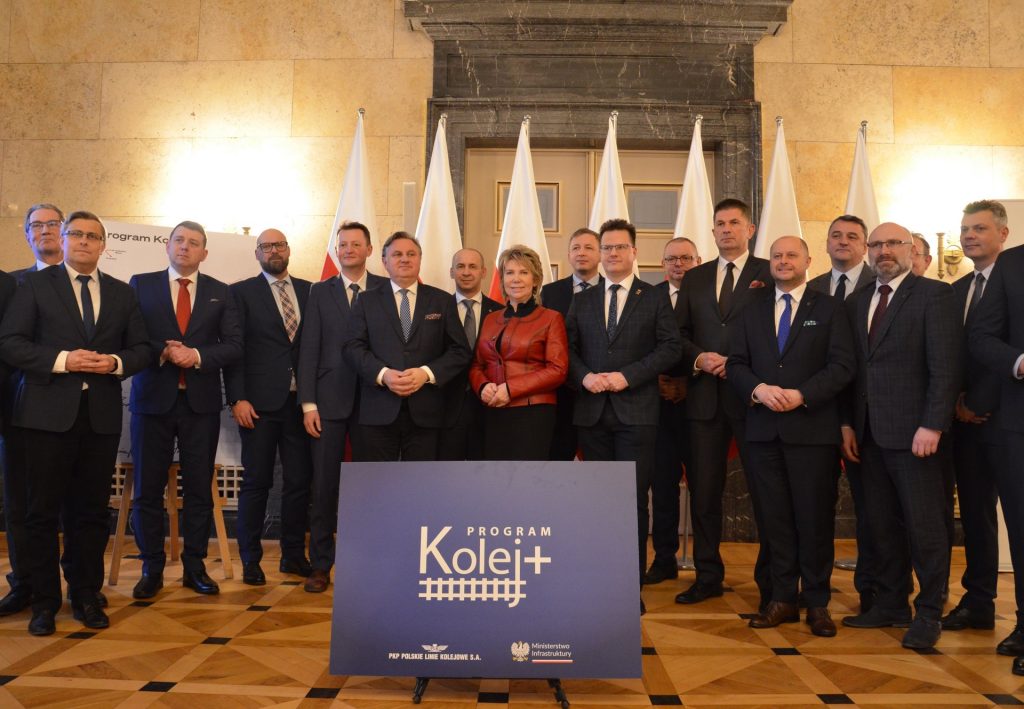 The contracts were signed with presidents and mayors of the cities of Bytom, Dąbrowa Górnicza, Katowice, Mikołów, Pyskowice, Ruda Śląska as leaders of the projects in Silesian Province.

“Kolej Plus is the first ever programme created in cooperation with local governments. The signing of the agreements means that in the Silesian Voivodeship there will be better train journeys from Orzesze to Katowice and more convenient railway connections for the inhabitants of Bytom, Dąbrowa Górnicza, Ruda Śląska and Pyskowice and other towns,” the Deputy Minister of Infrastructure Andrzej Bittel said at the contract signing ceremony.

To deliver better services a 20 km second track and catenary will be constructed between Katowice Piotrowice and Orzesze Jaśkowice allowing increased capacity between Katowice and Rybnik, Racibórz and further towards the Czech Republic. As part of the project, three new stops will be built in Mikołów (15 km south-west of Katowice). PLN 460 million (EUR 97.45 million) is the value of the contract submitted by the City of Mikołów under the “Increasing the capacity along the line No. 140 on the section Katowice Ligota – Orzesze Jaśkowice” project.

The City of Katowice has submitted a project covering the refurbishment of existing the railway line linking four towns in the metropolitan area and the construction of a loop to reinstate passenger traffic. Currently, the route is used mainly for freight traffic. When completed, the project will allow passenger trains to operate the line and to reduce travel time between Tychy and Katowice to 29 minutes. Safety will increase thanks to the construction of three collision-free intersections of tracks with roads at the rail level crossing. The project will provide passenger access to rail services in Ochojec, Murcki, Kostuchna and Tychy through the rail connection on Tychy – Katowice and Murcki – Katowice Ligota sections along the railway line No. 142. PLN 140 million (EUR 29.65 million) is the value of the contract.

With the city of Byto, 7 km northwest of Katowice, a PLN 270 million (EUR 57.2 million) contract has been signed for the construction of a new railway link to Ruda Chebzie and two stops which will provide a 10-minute direct journey between the two towns, situated in Katowice area. The project includes the construction of a 5 km new rail section and the modernisation of 4 km of the line between Zabrze Biskupice and Ruda Chebzie along the railway lines No. 189 and 132.

A PLN 350 million (EUR 74.14 million) investment submitted by the City of Ruda Śląska will support the creation of an alternative connection from Gliwice to Katowice and the construction of new seven stops to allow the introduction of passenger traffic. The line that runs through Ruda Kochłowice and connects Gliwice with Katowice is only used by freight trains. Trains from Ruda Kochłowice will reach Katowice in 18 minutes. The project will be carried out along the line No. 141 on the Gliwice – Ruda Kochłowice section, on the 164 Ruda Kochłowice – Hajduki section and on the 651 Hajduki – Gottwald section.

The residents of the City of Pyskowice, 32 km northeast of Katowice, will gain convenient access thanks to a PLN 94 million (EUR 20 million) investment covering the reconstruction and electrification of the existing line between Pyskowice and Pyskowice Miasto stations. The line will cross through the city centre and will allow convenient access to Katowice via Gliwice in about 45 minutes. Under the project, the Pyskowice Miasto station will be reconstructed and will be adapted to passengers with reduced mobility.

In November 2022, PKP Polskie Linie Kolejowe and the Marshal’s Office of the Silesian Voivodeship signed a PLN 475 million (EUR 100.6 million) contract for the reconstruction of the railway lines Żory (30 km southwest of Katowice) and Jastrzębie-Zdrój (72 km south of Katowice) towards Katowice providing fast and convenient rail travel to the capital of Silesian Voivodeship. This contract, together with the latest six signed contracts totalling a PLN 2 billion (EUR 423.7 million) investment are part of the Kolej Plus in Silesia programme covering revitalisation, reconstruction and construction works for 112 km of railway lines. Five projects which include 79 km of lines cover modernisation and expansion work and two other projects include revitalisation of 33 km of rail lines.

The programme is designed for cities with more than 10,000 inhabitants that do not currently have passenger rail connections or connections need to be improved. Thanks to the implementation of Kolej Plus project, 1.5 million inhabitants will gain better access to passenger railway services. The programme will contribute to the elimination of transport exclusion by ensuring better access to railway system.

The programme will be implemented until 2029 and benefits a PLN 11.2 billion (EUR 2.37 billion) state funding and PLN 2 billion (EUR 423.7 million) is the commitment of the local authorities.