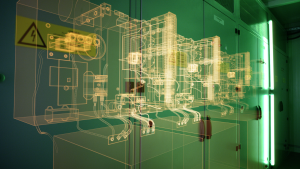 PKP Energetyka and Opole-based SBB Energy signed an agreement to supply components for the construction of a green hydrogen energy storage system at Garbce traction power substation. The system will use energy from a solar farm which will support the development of the rail sector based on renewable energy sources. The commissioning of the facility is scheduled for 2023.

The solution concept has been developed jointly by PKP Energetyka experts and scientists from the University of Zielona Góra.

According to the schedule, next year PKP Energetyka will be the first company in Poland to use this pioneering system of supplying the railways with energy based on hydrogen from RES. It will allow up to 23 kg of hydrogen to be stored at one time with the power outputs of the individual components determined at 36 kW for the electrolyser, 20 kW for the fuel cell capacity, and about 150 kWp for the solar farm.

The produced element will be used in the development and research phase for PKP Energetyka’s own purposes, such as to supply the traction substation, but the solution implemented in the future will also have the possibility of powering the traction system. The technical design of the system also allows for disconnecting the filled hydrogen cylinders, so it can be used, for example, to power railroad vehicles of PKP Energetyka.

The green hydrogen energy storage system will be an important component of the traction power substation in Garbce that together with the existing battery energy storage solution and the photovoltaic farm will create an ecosystem to generate and deliver dedicated energy for the rail transport.