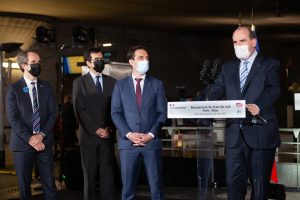 The French Prime Minister Jean Castex has inaugurated at the Paris Austerlitz station the Paris-Nice night train service along with the Minister Delegate in charge of Transport, Jean-Baptiste Djebbari, and the SNCF Chairman Jean-Pierre Farandou.

The introduction of the night train service expands this kind of train offer in France with trains currently running on the Paris – Briançon, Paris – Rodez/Latour-de-Carol routes. By the end of this year, the night train network will be expanded by two additional routes, from Paris to Tarbes and from Paris to Vienna.

In the next coming years, the Government plans to create around the night train connections which will develop the rail passenger transport, will increase the attractiveness of this transport mode, while promoting a sustainable mobility. The night train services are gaining new momentum and are an increasingly a popular solution for traveling across France and Europe. They can also be a response to the service needs of landlocked territories. 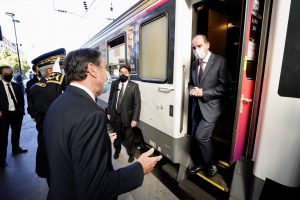 The inauguration of the Paris-Nice night train service marks the implementation of the EUR 4.7 billion Recovery Plan covering the modernisation of the rail network and the increase of passenger transport services.

A programme to upgrade the train cars as well as the adaption of the rail maintenance facilities are part of the Paris – Nice – Paris and soon the Paris – Tarbes – Paris route. The Plan announced by the government in September includes a EUR 100 million budget for the development of night trains services across France.

The Recovery Plan includes projects covering the modernisation of the railway infrastructure, better track maintenance services, the support for modal shift towards rail, as the most sustainable transport mode, the increase of the rail freight transport, fighting against noise pollution and the increase of the accessibility at the rail stations and securing level crossings.