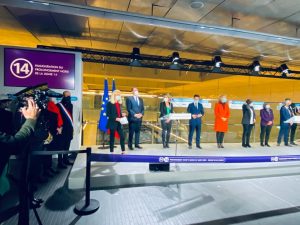 The Prime Minister of France Jean Castex has officially opened the extension of Paris Line 14 to Mairie de Saint-Ouen station, in the Région Île-de-France.

After many years of works the 5.8 km extension served by four station and the maintenance and train depot were opened. The fully- automatic underground line is extended to Mairie de Saint-Ouen – Région Île-de-France will relieve the Line 13 by around 25% improving the quality of transport for 650,000 daily users. With a minimum interval of 85 seconds between trains, the line has a capacity of 35,000 passengers per hour.

The line is operated by Alstom’s MP14 automated rubber-tyred metro trains made up of eight cars. The trains are designed to improve passenger experience while reconciling performance, energy efficiency and ease of maintenance in order to keep costs down throughout its lifecycle.

MP14 offers unprecedented levels of comfort and safety thanks to its interior layout and seats designed like an alcove to create both conviviality and privacy. Vast reception areas offer accessibility to all passengers, with dedicated areas and boomerang-shaped seats to improve the fluidity of passenger flows and capacity of the trains. 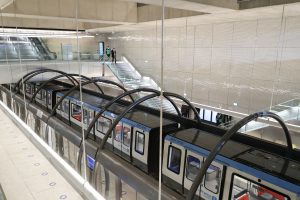 MP14 also has LED lighting efficiently distributed throughout the metro to provide a sense of security through consistent luminosity. Warm and cool ventilation controls the ambient temperature, whatever the season. The train also offers comprehensive video protection and dynamic passenger information on board. The train’s 100% electric braking system captures energy and re-injects it into the network as electricity, while limiting the emission of fine particles caused by the mechanical brakes. This system reduces the overall energy consumption of the metros, as well as air pollution, by up to 17%. The MP14 metro trains are also 40% quieter (-2 dB) with a 95% recyclability rate.

The extension of Line 14 makes the backbone of the Grand Paris Express project. By 2024, Line 14 will be again extended to Saint-Denis Pleyel business hub. Southwards, the plan is to create a direct, high-frequency line between the centre of Paris to Orly airport and will connect the future 15, 16, 17 and 18 lines. The use of the line will increase to 1 million trips per day, which will be the equivalent to RER B traffic.