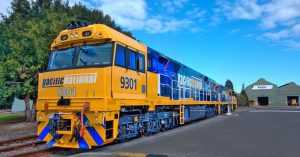 AUD 297 million (USD 214.4 million) is the value of the contract which “solidifies UGL’s position as Australia’s only manufacturer of freight locomotives,” the company says.

The C44 Evolution locomotives will be the most technologically advanced, fuel-efficient, and environmentally compatible diesel electric locomotives in Australia and will be designed and manufactured at the Broadmeadow plant, in Newcastle, New South Wales.

“The C44 Evolution locomotive is better for the environment with lower emissions and better fuel efficiency than anything Australia has seen before. We look forward to continuing our strong relationship with Pacific National through the delivery of these locomotives,” UGL Managing Director Doug Moss said.

The design of the C44 Evolution locomotive is based on the National Rail NR class but includes modifications and upgraded features.

The locomotive was designed after UGL won a contract to deliver Pacific National a new vehicle to match the 90 Class performance when hauling heavy coal traffic, while having the ability to operate high speed intermodal services.

Pacific National’s environmental approach is to manage all the related aspects including air emissions, noise, and land contamination through pollution spills. In the FY20, the total emissions of the rail operator increased slightly by 1.9%, compared to the previous reporting period, primarily driven by diesel consumption which increased by 2.4% and the emissions from electricity consumption decreased by 1.8% on the previous reporting period.