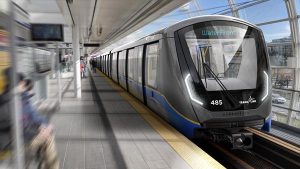 Thales will provide 82 innovative SelTrac vehicle on-board controllers (VOBCs) for 41 new trains for Vancouver SkyTrain fleet expansion which will operate on the Expo and Millennium lines.

The VOBC technology controls propulsion, braking, direction of travel, door operations, enforce speed limits and report identified faults. It is also a key component of SelTrac CBTC system, which is equipped on the two urban rail lines, allowing the new trains to operate safely and efficiently with the existing fleet.

In December 2020, TransLink, the company which manages the Vancouver transport system, awarded Bombardier Transportation a EUR 461 million contract for the delivery of 205 new rail cars for the two lines. The modern 5-car trains will provide additional capacity to meet the region’s current and future transport needs.

Under the contract 125 new SkyTrain cars will replace the first-generation MKI vehicles which entered service in 1985, and to support the Broadway Subway project. 80 SkyTrain cars will enter transport operation on the Expo and Millennium lines to improve the transport capacity, while the option for additional cars, stipulated in the contract, will support the Surrey Langley SkyTrain.

The procurement of the new Vancouver SkyTrain cars is part of the Expo Millennium Line upgrade programme. The project is funded with an investment of CAD 1.47 billion (USD 1.15 billion) through the Investing in Canada Infrastructure Programme with contributions from the Government of Canada, Government of British Columbia and TransLink.