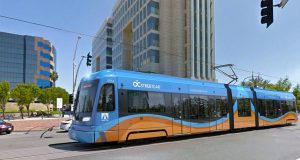 USD 45 million is the value of the contract to operate and maintain the line expected to enter testing and operations in 2022.

The contract includes a pre-revenue period of 17 months, with an initial 5-year revenue-operations term and two, 2-year options.

“The OC Streetcar will provide Orange County residents with an important additional transit option, and this is another exciting milestone toward bringing the project to the people of Orange County,” said OCTA Chairman Steve Jones.

The Orange County Transport Authority (OCTA) is responsible for the implementation of the project which has received a USD 149 million federal funding from the Federal Transit Administration. Along with other federal money, that funding is expected to pay for more than half of the USD 408 million project. Other funds come from the state and from Measure M, Orange County’s half-cent sales tax for transport improvements (the OC Go).

The OC Streetcar route serve Santa Ana city centre and dense employment areas that include county and local government offices and courthouses in the Civic Center.

Under the OC Streetcar operation contract, six vehicles will daily operate the line making stops at 10 locations in each direction every 10 to 15 minutes.

In 2018, OCTA selected Siemens Mobility to deliver 8 trams under a contract which includes an option for 10 additional vehicles.