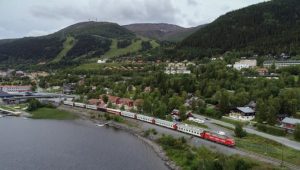 The train will run on the Stockholm – Copenhagen – Berlin line, replacing the old Malmö – Berlin line and is clearly in line with Snälltåget/Transdev’s ambition to revive night trains in Europe.

The night train service will be delivered without public subsidies, using Transdev- Snälltåget own funds and will be supported only by the revenue from tickets sold to passengers.

The train will daily until September 4 and will then provide several weekly trips until the end of October 2021.

To contribute to the energy transition and to minimise the environmental impact of the journey, the Snälltåget train uses only green energy from hydro, wind, and solar sources.

The first trans-European night train will be the first regular night train service to connect Sweden, Denmark and Germany since the 1990s, almost 30 years ago. Through this service, Stockholm and Copenhagen are now directly connected to Berlin by night train, which was not the case before.

The night train will use different locomotives along the route. The carriages have been acquired and completely renovated in 2019 by Transdev / Snälltåget, with all the necessary amenities including air conditioning, new seats, and new berths. Three different types of seats are available for reservation: single seats (non-reclining), reclining seats and compartments (seats, berths, or combined seats/berths).

A restaurant car will be available on the Swedish leg of the journey between Stockholm and Malmö and for the rest of the journey, a “snack” service will continue to be offered to passengers.

To achieve the objectives of the European Green Deal, only transparent and fair competition will allow the rail offer and the quality of service to increase, thanks to operators such as Snälltåget. This new “open-access” service, operated without any public subsidy, is Transdev / Snälltåget’s contribution to the debate on the development of competitive night train services in Europe. They are essential to achieve our climate goals, as a concrete alternative to air transport.

The project highlights the revival of the night train in Europe and marks the European Year of Rail.