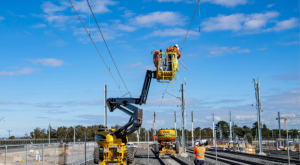 More than 3.1 km of track and 6,500 sleepers have so far been installed with more than 12,000 tonnes of rock ballast delivered.

Track laying and the installation of 5 km of overhead wiring is expected to be completed by the end of this year. More than 10 km of high and low voltage electrical cabling is also being installed.
The expanded facility will have space for an extra 37 trains, which will operate from 2024 on the extended Sydney Metro line from Chatswood, under Sydney Harbour, into the CBD and beyond to Bankstown.

The project is being delivered Systems Connect, a joint venture between CPB Contractors and UGL Engineering.
The Sydney Metro Rouse Hill facility is part of the 30-km Sydney Metro City & Southwest project which extends the new city’s metro network from the end of Sydney Metro Northwest at Chatswood, under Sydney Harbour, through new railway stations in the CBD and west to Bankstown. In 2024, the Sydney metro network will have 66 km system served by 31 stations.

The complex underground structures will be built for 6 new metro stations in Crows Nest, Victoria Cross, Barangaroo, Martin Place, Pitt Street and Waterloo. The works include excavation of two dive sites at Chatswood and Marrickville, a rail crossover cavern at Barangaroo and 57 cross passages along the alignment to connect the two tunnels. A bespoke precast facility next to the Marrickville dive site will produce more than 99,000 concrete tunnel-lining segments.

Sydney Metro, together with signalling and infrastructure upgrades across the existing Sydney rail network, will increase the capacity of train services entering the Sydney CBD from about 120 an hour today to up to 200 services beyond 2024. That’s an increase of up to 60 per cent capacity across the network to meet demand.