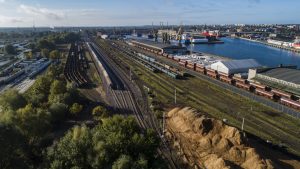 The Polish railway infrastructure manager, PKP PLK, has been laid 21 km of new tracks under the project on the improvement of Świnoujście and Szczecin port rail access.

PKP PLK has laid 14 km of new tracks in the area of the Szczecin Central Port station. At the station, a traction network, signals and railway traffic control devices were also installed. In other parts of the port of Szczecin, earthworks and drainage works are carried out in place of the old track removed. The ground under the track is reinforced to ensure the efficient passage of heavier freight trains. The contractor is assembling poles and supporting structures for the new catenary. The efficient and safe transport of goods to the port will be ensured by the modernisation of the engineering facilities.

At the Świnoujście station, works on the pedestrian access between the platforms of the Świnoujście Port stop and the Świnoujście station have been completed. 7 km of new tracks were prepared along with the traction network. The turnouts, important elements of the track system, responsible for the efficient service of trains at the station are already installed. The works also include the Lubiewo station. The Euroterminal area will benefit new constructed tracks.

A significant change for travelers will be better access conditions to trains at the Świnoujście Warszów stop. The structures of the new platform are already visible.

As part of the port rail access project, 84 km of traction network andl 100 kilometers of tracks will be modernised at the two ports, of which 61 km at Szczecin port and 35 km at Świnoujście port. The works also include the replacement of 285 turnouts, of which 177 at Szczecin port and 108 at Świnoujście port. The level of safety will be increased by the installation of modern railway traffic control devices and the reconstruction of 12 rail-road crossings in Szczecin and 10 in Świnoujście. In Szczecin, the bridge over the Parnica River and 3 railway viaducts will be rebuilt.

The investment will provide access to the ports of longer and heavier trains. There will be 750-meter trains with a load of 221 kN per axle. Thanks to the removal of the bottlenecks, freight warehouses will be handled faster and more efficiently. The reloading capacity of the stations in Szczecin and Świnoujście will increase. The ports will accept and clear more cargo, which will improve the competitiveness of freight transport and the potential of ports and will positively affect the economic development of the region.