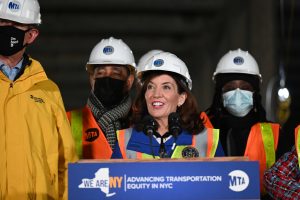 The Governor of New York and MTA announced that the phase 2 of the Second Avenue metro expansion project to 125th St in East Harlem entered engineering phase.

Under a USD 23 billion grant for transit expansions through the Infrastructure Investment and Jobs Act, a historic level of funding that doubled the amount of grants are available for major projects like Phase 2 of the Second Avenue Subway (SAS2).

The MTA submitted a request to the U.S. Department of Transportation to allow Phase 2 of the expansion to move forward and remain eligible for funding.

Under the phase 2, the Second Avenue metro expansion will include the construction of a 2.4 km line and three new ADA accessible metro stations in East Harlem. The Federal Transit Administration has advanced SAS2 into the engineering phase of the grant process, bringing the project one step closer to reality and allowing preliminary work to move forward.

Approximately 70 percent of East Harlem residents use public transport to get to work, much higher than the citywide average of 55 percent. The expansion of Second Avenue metro would help advance New York State’s goal for transport equity and would improve the local community’s access to jobs, health care, and other services, while reducing congestion, both on the streets and on the Lexington Avenue metro line and improving air quality.

This extension “will be built on the success of Phase 1 and bring the total Second Avenue Subway ridership to 300,000, which is equivalent to the entire Philadelphia rail system,” MTA Acting Chair and CEO Janno Lieber said.

The Phase 1 of the project extended the Q line from 63rd St to 96th St and was opened in January 2017, with additional stations at 72nd St and 86th St. Since its completion, the Second Avenue Subway has carried more than 130 million passengers.

A tunnel segment that will be used for Phase 2 was built in the 1970s from 110th St to 120th St along Second Avenue. This extension will allow convenient transfers to the Metro-North Railroad 125 St Station and will serve an additional 100,000 daily passengers.